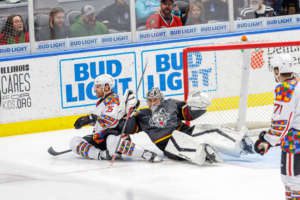 Welcome to Wolves Insider, presented by Are You Really Winning?: The weekly report that gives you an inside look at the latest Chicago Wolves news and happenings. Look for a new edition of Wolves Insider each Tuesday.

Pyotr Kochetkov is more comfortable stopping pucks than he is doing interviews in English, but the Russian goaltender still gave it his all when Wolves Insider asked for a minute of his time to discuss returning to the Wolves.

Early last week, Kochetkov was reassigned to the Wolves from the Carolina Hurricanes of the NHL and the 23-year-old netminder was stellar in his two starts since — both victories. On Wednesday, Kochetkov made 19 saves in the Wolves’ 6-2 win over the Moose in Manitoba and he followed that up by stopping 22 shots during a 6-2 triumph over the IceHogs on Saturday night in Rockford.

“It was a nice moment for me to be in the NHL but I’m happy to come back to the AHL and be with my boys on the Wolves,” Kochetkov said.

During his time with the Hurricanes, Kochetkov was 10-4-5 with a 2.33 goals-against average and .913 save percentage and was named the NHL’s Rookie of the Month for December. He said the biggest adjustment to playing in the NHL was the speed of the game.

“It’s faster,” Kochetkov said. “There are a lot of nice players with hard shots and there are games almost every day.”

“It’s my second season in North America and my adaptation to the game here is getting better,” he said. “It’s taken a little bit of time but the boys, coaches and agents help me every day.”

Kochetkov is expected to start at least one of the Wolves’ final two games of their season-long, six-game road trip that concludes with back-to-back contests against the Tucson Roadrunners on Tuesday and Wednesday, respectively, in Arizona.

When coach Brock Sheahan found the Wolves short at the forward position due to injuries for their two games in Manitoba last week, he approached defenseman Alex Green with a question.

“Brock asked me if I would be willing to play some forward because of all the injuries we had up front,” Green said. “I was happy for the challenge and opportunity.”

uesday, Green centered the fourth line and was flanked by Alexander Pashin on his right and Joseph LaBate on his left. Green got off one shot during the Moose’s 2-0 victory. He also…