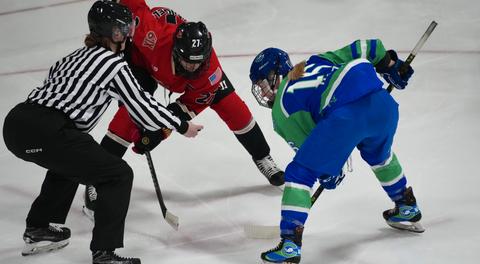 Six games and six different winners across a trio of doubleheaders

The Premier Hockey Federation (PHF) regular season schedule continued with second half action ahead of the All-Star break. The weekend featured three series doubleheaders that all produced split results between the Boston Pride and Montreal Force, Connecticut Whale and Toronto Six, and Metropolitan Riveters and Buffalo Beauts.

Here’s a closer look at the results, top performers, and notable highlights:

Toronto scored three goals in a span of 54 seconds to break a 2-2 tie in the middle frame and defeat Connecticut with multi-goal performances from Breanne Wilson-Bennett, Tereza Vanišová, and Brittany Howard.

Buffalo snapped a franchise record 10-game losing streak with a home ice win over the Riveters backed by a 41-save performance by Lovisa Berndtsson who earned her first career PHF win.

The Riveters rebounded with an eight-goal offense led by Kelly Babstock and Madison Packer who both had two goals and one assist each as the team combined for six in the third to stun the Beauts.

Jade Downie-Landry scored on the power play at 4:02 of the extra frame to lead the Force to the franchise’s first ever overtime victory and win against the Pride in Rivière-du-Loup.

Kennedy Marchment scored twice and Caitrin Lonergan added a goal and an assist for the Whale who became the first team to defeat T6 on Canadian ice in regulation.

All seven teams have now completed over half of their regular season schedules with a total of 50 games from the league’s record 84-game calendar complete. The Boston Pride (12-2-1) secured four of a possible six points this weekend by virtue of their regulation win and overtime loss and remain in first place with 34 points through 15 games. The Toronto Six (10-2-2) picked up three points and stand pat in second place with 30 points, followed by the Minnesota…