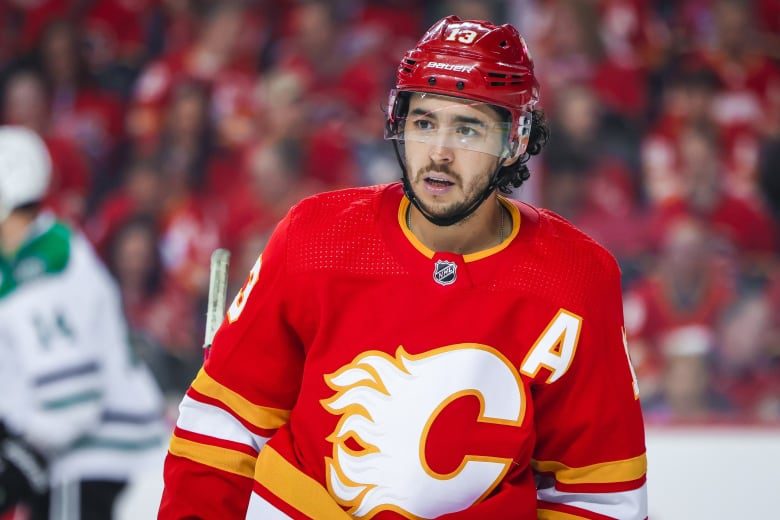 For the first time since he left, Johnny Gaudreau has returned to the city where he rose to league stardom.

A Calgary Flame his first eight seasons of professional hockey out of Boston College, the left-winger stepped back onto Saddledome ice Monday in Columbus Blue Jackets colours.

His teammates gave him a taste of what he might expect in his first game back in Calgary by booing him when he touched the puck in the morning skate.

“It was funny,” Gaudreau, from Salem, N.J., said after the pre-game skate. “Just lightened the mood a little bit. I could barely stickhandle I was laughing so hard going up and down the ice.”

The 29-year-old’s departure from Calgary as an unrestricted free agent for an American market last July was less surprising than his choice of destination.

The Blue Jackets missed the playoffs by 19 points last season and ranked last in the NHL heading into Monday’s game at 14-30-2.

“We’ve been battling with a lot of injuries this season,” Gaudreau said.

“Some kids are getting called up that I didn’t really know very well. It’s been great getting to know them, gives me an opportunity to kind of get to know a lot more people in the organization.”

Gaudreau and the Blue Jackets agreed to a seven-year, $68.25-million US contract.

The Flames subsequently signed left-winger Jonathan Huberdeau for eight years and $84 million, which suggested Gaudreau left money on the table to sign with Columbus.

Gaudreau led the Flames in points in all but two of his eight years in Calgary.

He posted career numbers last season with 40 goals and 75 assists in 82 games.

His 115 points tied with Huberdeau for second in the league behind Edmonton’s Connor McDavid.

His Game 7 overtime winner versus the Dallas Stars electrified the Saddledome and catapulted the Flames into the post-season’s second round for the first time in seven years.