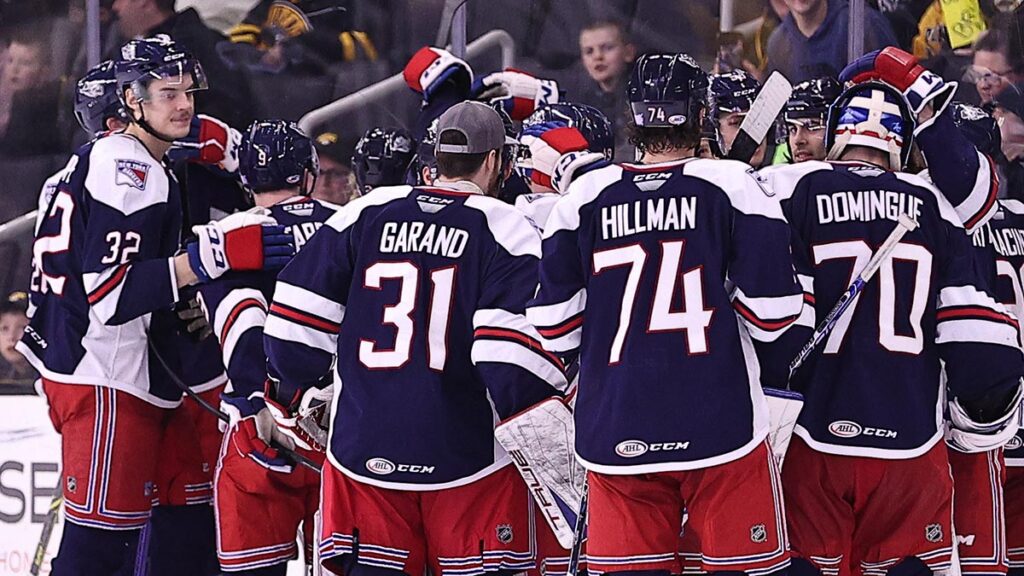 Here is a look at Sunday’s action around the AHL:

HARTFORD 4, PROVIDENCE 3 (OT)
Will Cuylle scored 1:05 into overtime to give the Wolf Pack a victory and snap a six-game losing skid at Amica Mutual Pavilion. Assigned by the New York Rangers after clearing waivers earlier in the day, Jonny Brodzinski scored 2:51 into the contest in his return to the Hartford lineup. Vinni Lettieri scored once shorthanded and once on the power play for the Bruins in the back-and-forth contest. Ryan Carpenter scored his 10th goal in 18 games as the Wolf Pack improved to 5-1-2-2 in their last 10 outings. Louis Domingue recorded the win with 23 stops, while Brandon Bussi helped the P-Bruins to earn a point with a 38-save afternoon.

MANITOBA 4, TEXAS 3 (OT)
The Moose earned their second overtime win over the Stars in as many days at Canada Life Centre, as Dominic Toninato scored his second goal of the afternoon 44 seconds into OT. Daniel Torgersson and Leon Gawanke also scored for Manitoba and Oskari Salminen finished with 36 saves. Oskari Laaksonen and AHL All-Stars Thomas Harley and Riley Barber scored for Texas, which trailed 3-0 before rallying to earn a point for the 17th time in 18 games (13-1-4-0).

CLEVELAND 5, CHARLOTTE 2
The Monsters rebounded from Saturday’s 9-0 loss, scoring five unanswered goals and getting 33 saves from Daniil Tarasov to salvage a split of their weekend visit to Charlotte. Riley Nash and Gerry Mayhew gave Charlotte a 2-0 lead before Cleveland rallied, led by three-point efforts from Tyler Angle (2g, 1a) and Trey Fix-Wolansky (1g, 2a). Josh Dunne scored shorthanded and Cole Fonstad put the Monsters ahead to stay with 10:35 to go.

COLORADO 4, HENDERSON 3
David Farrance scored his first goal as an Eagle with 9:02 remaining in the third period, breaking a 3-3 tie and sending Colorado to its second win in as many days over the Silver Knights. Farrance also contributed a pair of assists for a three-point night, giving him six points in his last four outings, while Charles Hudon, Alex Galchenyuk and Justin Scott had Colorado’s other goals. Brendan Brisson and Sakari Manninen tallied a goal and an assist apiece for Henderson.

COACHELLA VALLEY 4, SAN DIEGO 2
The Firebirds established a new AHL season high by extending their point streak to 13 games (12-0-1-0) with a come-from-behind win over the Gulls. Kole Lind and Jesper Froden scored 25 seconds apart early in the third period to turn a 2-1 deficit into a 3-2…