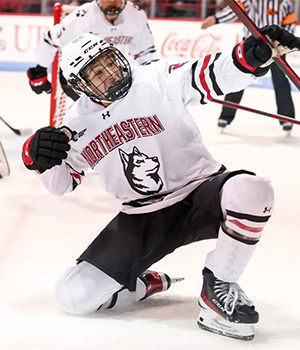 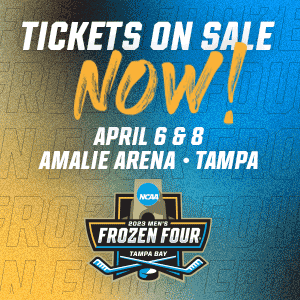 As one of the youngest, if not the youngest, players in college hockey last season, Northeastern’s Jack Hughes had a ‘We’re not in Kansas anymore’ realization that his size, or lack thereof, would be a limiting factor as a freshman.

It was something that he could get away with in junior hockey, but going up against upperclassmen at the collegiate level, Hughes recognized the mismatch.

But until he had physically matured and could spend a summer in the weight room to get bigger and stronger, he knew the best way for him to contribute in his first year was to keep his feet moving.

“The biggest thing for me was always skating, trying to avoid that contact because most of the time, they’re going to pin me up against the board, and I’m going to turn (the puck) over. That’s something I needed to work on anyways,” he said.

The Westwood, Mass., native enjoyed a good, not great, first year on campus. Hughes finished with seven goals and nine assists for 16 points. He played a strong defensive game for the Huskies but knew he had more to offer offensively.

And like most players his age, Hughes understood the summer between his freshman and sophomore campaigns would be crucial to adding a little more muscle to his frame to be able to compete in the hard areas of the ice.

While that was his primary focus in the offseason, the young forward knew one summer wouldn’t be enough. It required a process to get where he needed to be.

However, his body of work at the USNTDP in junior hockey and his first season at Northeastern caught the attention of the Los Angeles Kings, who selected Hughes with the No. 51 overall pick in the second round of the 2022 NHL Draft.

The combination of being drafted and knowing he had more to showcase offensively were the primary motivators entering his sophomore season.

“I didn’t necessarily expect to go in as a 17-year-old and dominate college hockey or score a ton of goals,” said Hughes, who is no relation to the first overall pick in the 2019 NHL Draft, or either of the other two Hughes brothers, Quinn and Luke. “I wanted to come into this year and, despite not being all that much bigger and stronger, start to play with more confidence, make more plays, continue to…