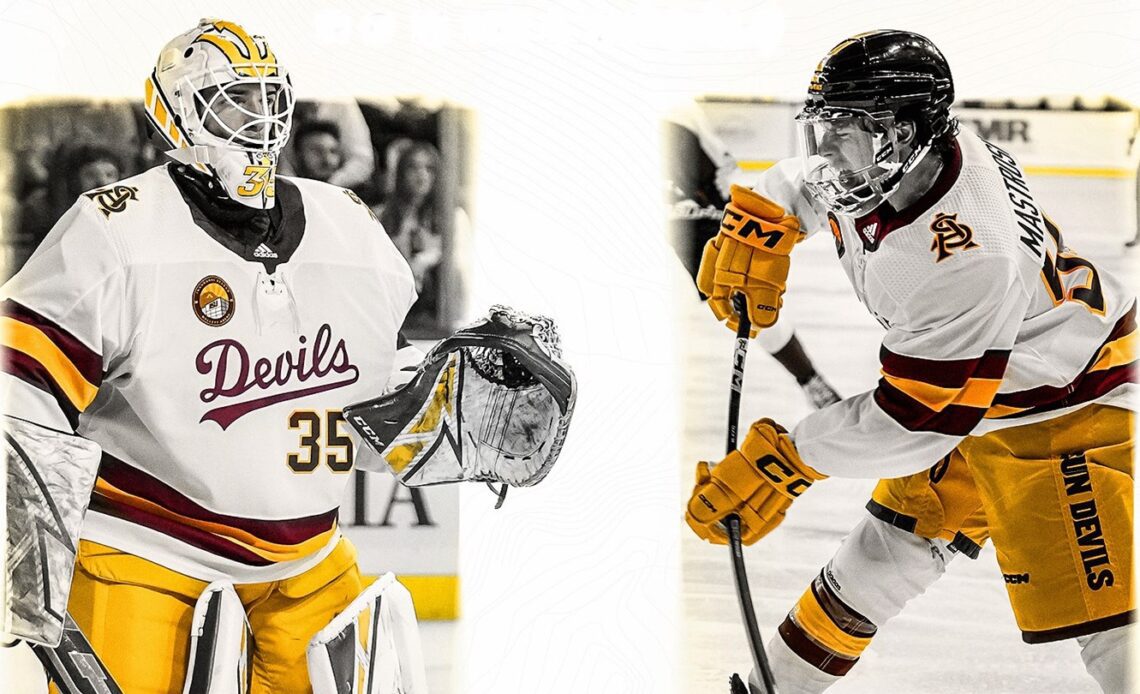 
TEMPE – Sun Devil Hockey has two players nominated for the prestigious Hobey Baker Memorial Award, an annual award for the most valuable player in college hockey.

Senior forward Robert Mastrosimone and sophomore goaltender TJ Semptimphelter are two of the 82 NCAA student-athletes nominated for the award, announced on Thursday.

Mastrosimone came to Arizona State from Boston University and has played in all 25 games for the Sun Devils. Mastrosimone rules the Sun Devil stat sheet, outpacing his teammates in goals (8), assists (17), and points (25). He’s made a huge impact in the shots category with 91, which is ranked third among all NCAA skaters. He averages 3.79 shots per game. Both of his marks in assists and points ranks within the top 15 nationally.

This season, Mastrosimone has been the go-to in do-or-die situations. Two of his eight goals went down as game-winning goals, both against ranked opponents in blockbuster moments.

His first game-winning goal came against then-ranked No. 6 North Dakota in the U.S. Hockey Hall of Fame Game on October 29, 2022 in Las Vegas. He scored just 24 seconds into the third period to break a 2-2 tie with one of the most storied and historically-dominant programs in college hockey.

The second game-winning goal happened at Mullett Arena on November 16, 2022 against then-ranked No. 1/2 Minnesota. After a back-and-forth battle through regulation, Mastrosimone stood up as the overtime hero. He notched the game-winning goal in 3-on-3 OT three minutes and ten seconds into extra time, giving ASU its highest-ranked win in Sun Devil Hockey history.