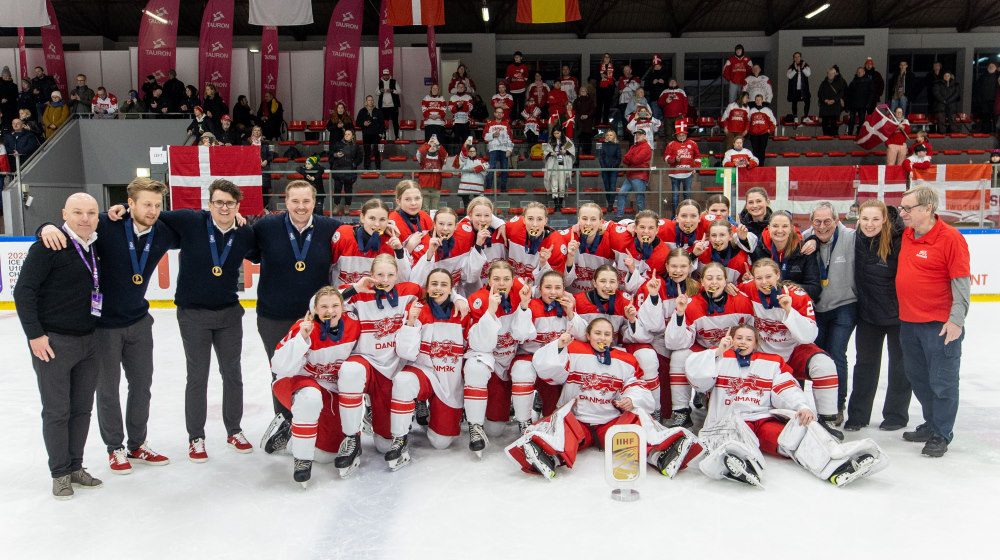 What a difference a few months can make. In September, Denmark finished rock bottom in the 2022 IIHF Ice Hockey U18 Women’s World Championship Division I Group B and was lucky there was no relegated team. Yet on Sunday, just four months later, the Danes are celebrating a flawless tournament at the same level and looking forward to competing in Division IA next season.

For team captain Frida Kielstrup, it’s especially satisfying. This is her third and final tournament with the U18s, and she is leading her team back to the level where she made her debut in 2020.

“It’s a very nice feeling,” she said. “We talked about this and it’s very special to bring this team up a level and give them the opportunity to show what they can do in the future, to show the potential of this group.”

Potential is a big part of the Danish team this season. With an average age of 15.5, it was the youngest roster in Katowice. And the new additions, largely drawn from the 2008 generation, made a full contribution. Nikita Bergmann, aged 14, was the tournament’s leading scorer with 5 goals and one assist across four games. Kielstrup’s alternate captains, Silja Rasmussen and Klara Holm, are both 15 and will be back for more tournaments in future.

“This year we also have a young team so next year we will only have a few changes,” Rasmussen added. “We’re looking forward to some very exciting years with these players.”

Holm and Rasmussen were a big part of a defence that allowed just three goals in four games. Much of that was down to a close-knit roster forged in a busy schedule of regular team practices and meetings since September.

“Our teamwork this year was spectacular both on the ice but also off the ice,” said Holm, reflecting on how she and her colleagues quickly became friends as well as team-mates. “I think that’s very important for us. Next year we have high expectations.”

Goalkeeper Caroline Bjergstad was a big part of that success as well. She played every minute of the campaign and, after impressing in adversity in Austria in September, backstopped her team to a memorable gold here.

“[Caroline] was amazing,” added Rasmussen. “She always brings a good mood and a great attitude. She’s always encouraging us, speaking with us and that has a huge impact on the team. I don’t think we could have done this without her.”

However, Bjergstad was not named top goalie at the tournament. That honour went to Poland’s Nadia Ratajczuk. She had…