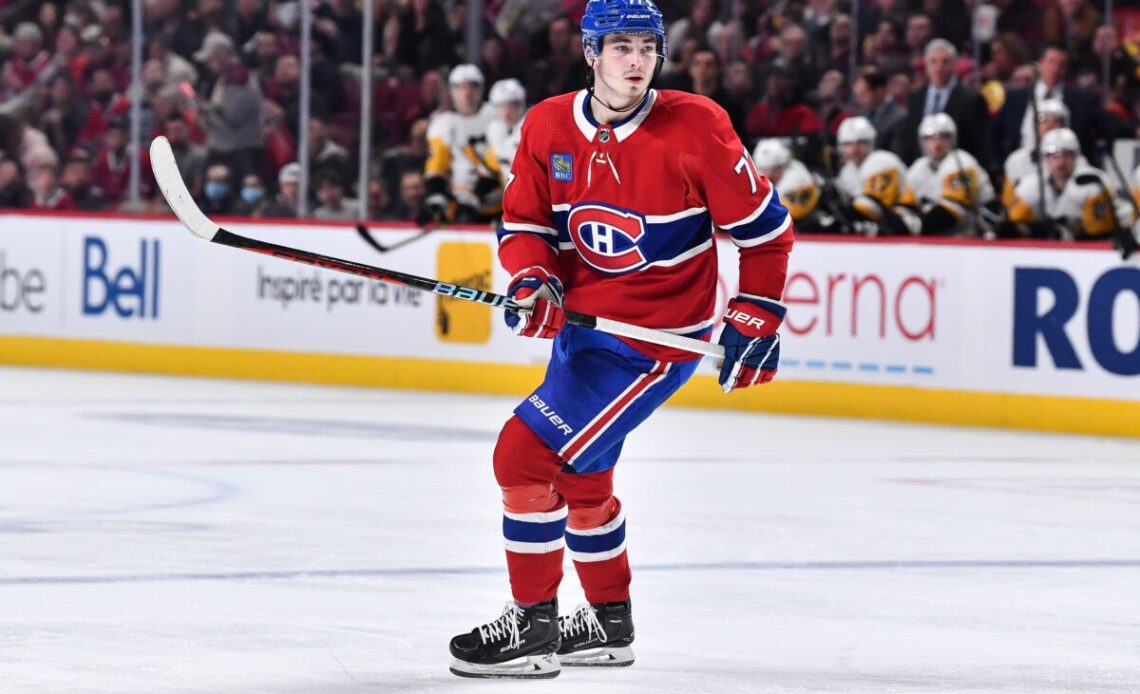 The Montreal Canadiens spent the weekend in the Big Apple, and while the Habs took a bite out of the shiny red delicious, there was a worm at its core. The Habs came away with a 1-1 record playing the games on back-to-back nights. Head coach Martin St. Louis has them back on track, meaning that they are no longer rolling over for opponents but instead providing the effort that the coach has demanded. Three areas stood out over the weekend matchups. While this season is unlikely to end in a playoff spot, fans can look at these takeaways and assess if there have been any improvements heading into the second half of 2022-23.

Canadiens Takeaway No. 1: Kirby Dach Is a Center

Kirby Dach is having a career year, points-wise. He surpassed his point total of 26 in 70 games played last season with the Chicago Blackhawks by scoring his 27th point of the campaign in only his 35th game, putting him on pace for a 50-point season. When the general manager (GM) Kent Hughes acquired him in a trade completed on the draft floor, the audience was audibly shocked at the move by Chicago. For Montreal, the expectation was that they had found a potential top-six center.

“We’ve all been intrigued, you know, can he play center in this league? He’s 21 years old, so I don’t think any of us were ready to say he wasn’t going to be a center. Sometimes circumstances make you really take a look at that now. Not that we haven’t throughout the season, but you’re really forced into it now. He gave us a really good game.”

So far this season, he has shown why Hughes targeted him. The 6-foot-4, 212-pounder plays a strong possession game and uses his size to his advantage to make use of his long reach to shield or strip the puck. He is a sublime skater, and more importantly, he has the patience to hold on to the puck as he takes the time needed to identify the best plays to be made. Offensively, this does look like a breakout year in the making.

Dach seems to have embraced the concepts St. Louis has espoused and has been able to express his creativity on the ice. That showcases the talents mentioned above. It gives him the confidence to use his shot more, which, when he starts to use it more, will open up opportunities for him, as defenses can no longer cheat in positioning to cover the passing lanes but will have to respect his shot.

A skill that can make him a valuable asset…