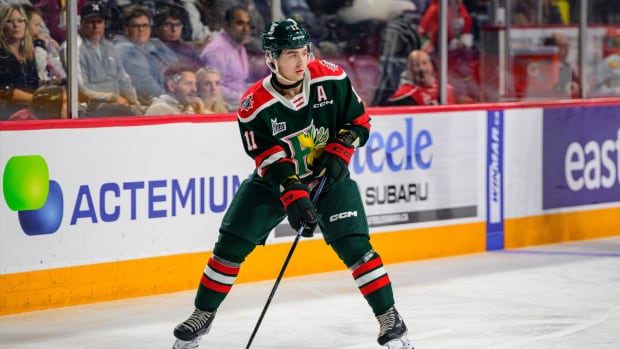 When the Columbus Blue Jackets called out Jordan Dumais’s name with the second-last selection in the third round of the 2022 NHL entry draft, it proved to be a great pick.

Now in his third season with the Halifax Mooseheads, the 18-year-old Dumais is leading the Canadian Hockey League (CHL) in scoring with 48 points in just 21 games.

The consensus No. 1 pick in next year’s NHL draft, Connor Bedard of the Regina Pats, also has 48 points but has played in one more game than Dumais.

Not surprisingly, the Blue Jackets have stayed in close contact with their prospect.

“I’ve been talking with them a bit this season and they’ve been coming to some of my games so we do keep in touch,” said Dumais. “Last summer I worked on some things that I think I needed to improve on and I think it’s all paying off.”

Part of that work was in the gym as he continues to increase his strength. That’s made a big improvement in the way he controls the puck and makes more explosive shots this season.

Dumais’s offensive output to start the season shouldn’t come as a big surprise. In the second half of last season he took his game to another level and was one of the league’s top offensive players, finishing the year with 109 points in 68 games.

This season he is scoring at a 2.28 points per game average. That puts him on pace for a 155-point season. That would shatter the Mooseheads’ single-season record of 137 points set in 1999-2000.

Dumais, who grew up in Île Bizard near Montreal, says his favourite player is NHL star Patrick Kane.

Last week, Dumais had a six-point game and his outstanding play so far this season could have him in line for an invite from Hockey Canada to Team Canada’s world junior selection camp.

With the tournament set to be played in Halifax and Moncton, N.B., Dumais says he’d love to play in the tournament in front of Mooseheads fans. And his coach says he deserves to get the tryout invite.

“How can he not get invited,” stated Mooseheads head coach Sylvain Favreau. “I think he deserves an invitation and certainly if he does get an opportunity to go to the camp, he’ll light up some eyes there for sure.”

The one knock against Dumais has always…