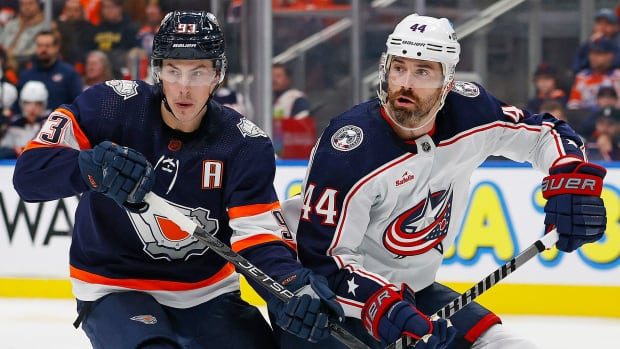 Kent Johnson scored the overtime winner as the Columbus Blue Jackets came away with a surprise 3-2 victory over the Oilers on Wednesday in Edmonton.

Johnson’s shot from the top of the circle went in off Oilers’ goalie Stuart Skinner’s glove and into the net 2:29 into the extra session.

Boone Jenner and Kirill Marchenko also scored for the Blue Jackets (15-30-3) who have managed to win two of their last three and get five points out of their last possible six.

Derek Ryan and Zach Hyman responded with goals for the Oilers (27-18-4) who saw a six-game winning streak snapped. The Oilers are the only team in the NHL that has been unable to stretch a winning streak to seven games or more in the last 20 years.

Edmonton had some early chances, but it was the Blue Jackets who struck first 12:25 into the opening period when Jenner was able to tip an Adam Boqvist snapshot from the point past Skinner. Jenner has now scored in three consecutive games, giving him 14 goals on the season.

Skinner was able to keep it a one-goal game six minutes into the second period, stopping Johnny Gaudreau on a partial breakaway.

The Oilers pulled even midway through the middle frame as Ryan picked up a loose puck at mid-ice and beat Columbus goalie Joonas Korpisalo with a long rising shot for his seventh.

Shortly after Korpisalo robbed Leon Draisaitl with a huge glove save, Edmonton struck on the power play with 3:44 remaining in the second when Connor McDavid found Hyman at the side of the net for a redirection into the net for his 25th. The assist extended McDavid’s points streak to 11 games, and also gave him points in 28 of his last 29 games.

The Blue Jackets tied the game 11:26 into the third period on a great individual effort as Marchenko came out from behind the net and battled hard to slide it under Skinner for his 11th goal to send the game to extra time.

Out with injuries for Edmonton were Kailer Yamamoto (undisclosed) and Ryan Murray (back).

Edmonton forward Hyman is already experiencing a career season, now sitting with 57 points in 48 games this year, besting his previous career high from last year of 54 points in 76 games.

The Oilers host Chicago on Saturday and then are off until Feb. 7.