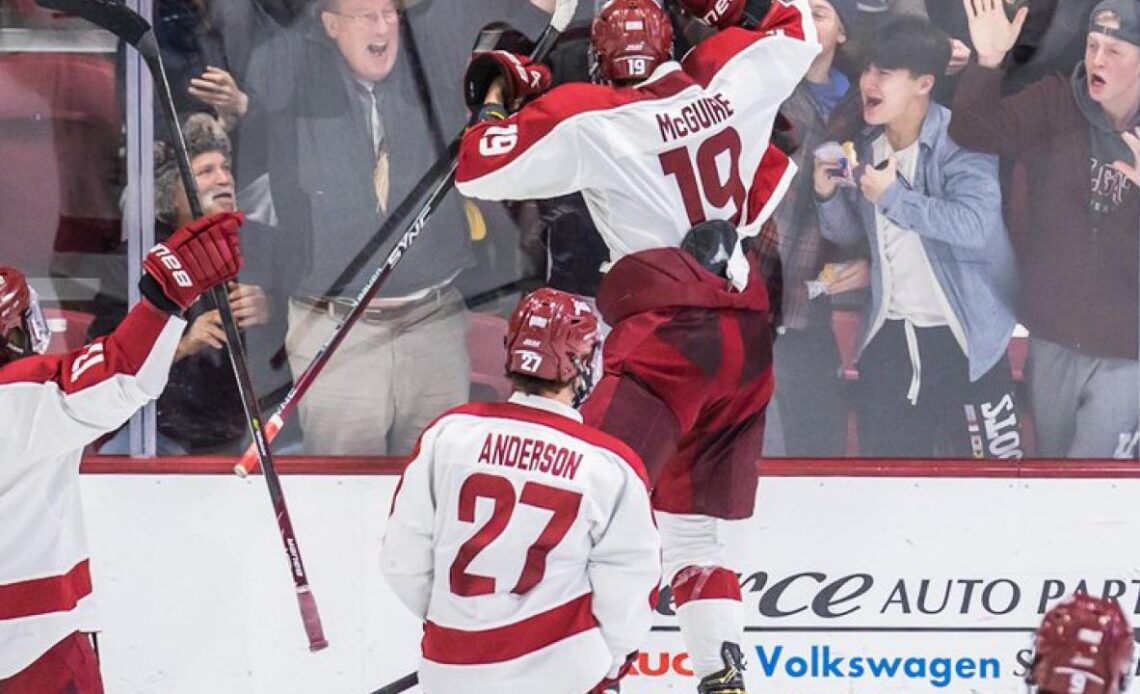 No. 1 Quinnipiac men’s hockey suffered their second loss in a row, blowing a 2-0 lead and falling to unranked Colgate, 3-2, on the road on Saturday.

The Bobcats lost at No. 16 Cornell on Friday night by way of a 4-0 shutout at the hands of the Big Red, who ended a QU extended winning streak for the second straight year.

UPSET: No. 16 Cornell topples No. 1 Quinnipiac with 4-0 shutout on Friday

Ryan McGuire, Ben Raymond and Ethan Manderville each scored for the Raiders (12-10-2, 9-3-0 ECAC), who shut out Princeton 5-0 on Friday. Carter Gylander stood tall in net with 27 saves. Nick Anderson had two assists.

Colin Graf, the Bobcats’ leading scorer, found the back of the net for QU (18-3-3, 12-2-0 ECAC) as well as Christophe Fillion. Yaniv Perets made 22 saves after getting pulled when he stopped 18 of 21 shots at Cornell on Friday.

Quinnipiac out-attempted Colgate, 65-46 on the night, but the Raiders blocked 20 shots to the Bobcats’ eight.

Graf opened the scoring on the power play with 7:06 to go in the first period with a one-timer from the left circle, and Fillion doubled the lead to 2-0 just 4:04 into the second period, taking seam pass from the point to the slot before making a nice move around Gylander.

From there, it was all Colgate as the Raiders rode three unanswered goals to a third straight victory.

OH HOW SWEEP: How No. 4 St. Cloud State swept No. 3 Denver in a huge NCHC series

Manderville started the rally on a 5-on-3 power play when he tipped in Alex Young’s shot at the top of the crease nearly five minutes after Fillion’s goal.

McGuire tied it 2-2 at the 6:37 mark of the third period, potting his own rebound off the rush after the Bobcats failed to contain the loose puck.

The Raiders are in the lead!!

Raymond gave Colgate a 3-2 lead just over three minutes later. Anderson looped the puck out to neutral ice, sending Raymond into the offensive zone, where he outmuscled Quinnipiac captain Zach Metsa to win the puck-battle and beat Perets to the left post.

The Bobcats will look to right the ship next weekend when they host Sacred Heart on Friday, Jan. 27, in the semifinals of the Connecticut Ice tournament. The winner will advance to the championship on Saturday, Jan. 28 facing the winner of No. 13…