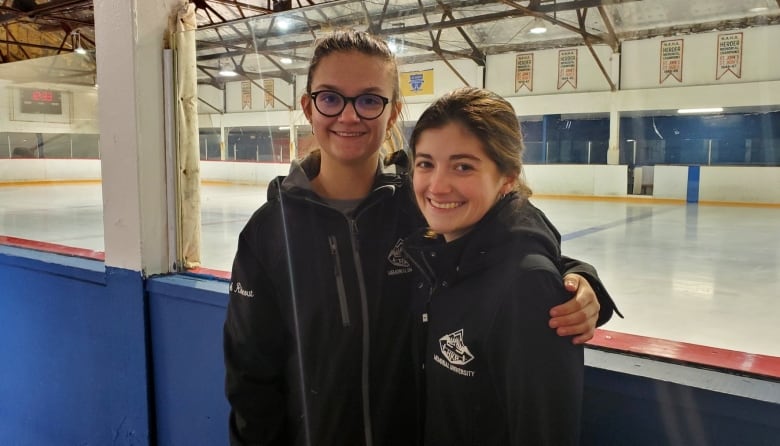 They learned the ropes together and now they’re making history together. Clare Howie of Paradise and Leah Rideout of Clarenville are the first women to officiate Junior B hockey in Newfoundland and Labrador — the highest level ever reached by women in stripes in the province.

“I think it’s a massive step for us in Newfoundland and Labrador officiating, for sure. We’ve already seen across the country that women are already doing this kind of stuff,” said Howie, who donned the referee’s orange arm bands on Sunday as the game’s first woman to do so at the junior level.

And it’s fitting that the pair would share such an important step for women in hockey in N.L. — they’ve been climbing the refereeing ranks together every step of the way, completing degrees in kinesiology at Memorial University together and even working for the same company as part of their work terms.

“We got selected to go to OPOE in Gander for the female U16 camp and we just clicked,” said Rideout, who became the first Junior B lineswoman in a game the night before Howie’s debut.

“It just always seems to be us lining up together.”

Rideout got her officiating start in Clarenville, where there was simply a need for more referees in the town of just over 6,000 people.

At 18 she began to take what was, at first, just a winter job a little more seriously, she said, seeing bigger opportunities present themselves with Atlantic tournaments being hosted in her hometown.

For Howie, things progressed from a simple suggestion from a friend in Paradise that they should operate the game clock for minor hockey games in their community.

Young referees learn from experience and are guided through the job by seasoned veterans who provide feedback after each game.

As the pair progressed, so too did their confidence — and the confidence of the senior official staff.

“They have really put a lot of faith in us. So when they assigned us those games over the weekend, it was a real shock, honestly. It was an unreal feeling to be a part of…