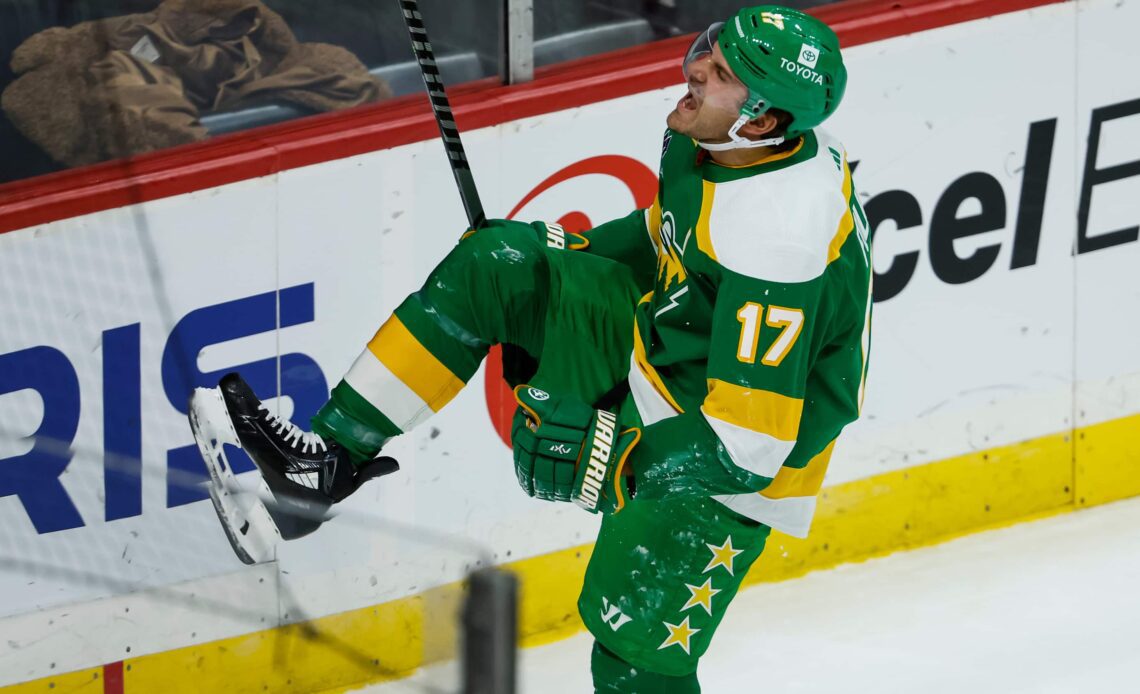 Marcus Foligno scored twice and Filip Gustavsson made 28 saves as the Minnesota Wild took down the Winnipeg Jets 6-1 on Wednesday night in St. Paul.

Matt Boldy added a goal and two assists for the Wild, and Kirill Kaprizov extended his point streak to seven games with a power-play goal 28 seconds into the third period.

It was Minnesota’s largest margin of victory this season and perhaps the team’s most complete game.

“It was a good effort. Everyone was just really into it,” said Foligno, who took a stick to the ear in the final minutes and required stitches. “It’s not always pretty, but you’re going to get your points just from team play.”

Foligno entered with only one goal all season, which came in Minnesota’s second game. The veteran winger scored on a rebound early in the third to give the Wild a 3-1 lead and added another midway through the period on a give-and-go play with linemate Joel Eriksson Ek.

Gustavsson made his third straight start in net with Marc-Andre Fleury still out with an upper-body injury. His biggest save came midway through the second period when he stuffed Cole Perfetti on a breakaway.

The six goals allowed by Connor Hellebuyck were the most he’s given up all season. He came in permitting 2.07 goals per game, second-best in the NHL. Minnesota’s final goal drew chants of “Sieve! Sieve!” from Wild fans.

Mason Shaw put the Wild up 1-0 in the first period just as Minnesota’s first power play expired. Shaw fired a shot from above the left circle that found its way through traffic and past Hellebuyck.

Wild defenceman Cam Addison scored his first goal this season and the third of his career early in the second for a 2-0 lead.

Kaprizov’s power-play goal was Minnesota’s first in six games. Boldy’s goal in the third also came on the power play.

“I think getting that first one, Kirill’s definitely helped us out for sure,” Boldy said. “A couple laughs in the huddle after the goal, saying we finally got one. So it’s obviously good to get one there.”

Kyle Connor had Winnipeg’s goal, a wrister that made it 3-1 in the second period.

Second effort from KC for his sixth of the season! 🎯 <a href=”https://t.co/aQvwfBn4JU”>pic.twitter.com/aQvwfBn4JU</a>

The Jets were whistled for eight penalties, two of which led to power-play goals for Minnesota.

“I think one of the concerns is the…