Abbey Barcless thankful for everything ice hockey has given her – Trentonian 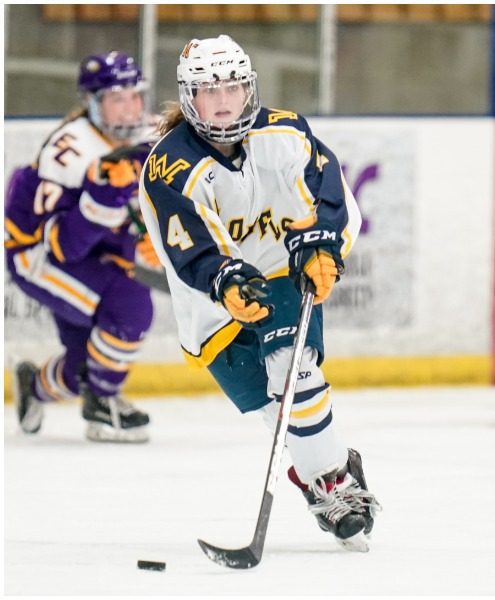 It takes a special kind of player and person to be thankful for those 4:30 a.m. wake-up calls for ice hockey practice.

Abbey Barcless is that special player and person.

A senior at Wilkes, Barcless is one of the leaders on the Colonels and she plays a major role on the defense.

“What’s not to be thankful for, I’m graduating college,’’ said Barcless. “I’ve played the sport I love for four years, my parents and family have been so supportive. I’m thankful for everyone on this campus, thankful I found a place I enjoy being as Wilkes and really beyond thankful for hockey as a sport because every practice we have is one less, so I’m thankful for every 4:30 wake up.’’

As her hockey career winds down and she heads to the corporate world, Barcless, a total team player, is looking to make this season an exceptional one.

Coming off a three-win season last year, the Colonels are 2-5 and 2-2 in the conference and will certainly eclipse last year’s totals.

“It’s going great,’’ said Barcless. “We have done a complete 180 since the last three years. We have a new coach, our systems have changed and we have some new players. There’s a more of a hungry mentality than in the past.’’

Growing up Barcless had steady diet of hockey as her dad, Chris, who was named the Youth Hockey Coach of the Year by the Atlantic Amateur Hockey Association in 2021, has been heavily involved with the Mercer Chiefs.

Her sister, Trinity, has been the Middle Atlantic Conference Player of the Year at Stevenson and is now coaching In the DC area.

Barcless has always been a player with great speed, solid stick skills and willing to lead by example

“I’m always willing to do the dirty work,’’ admitted Barcless. “I’ve realized a lot of the younger girls look up to me and look at what I am doing so I try to lead by example. I am a hard worker and I push myself every day.’’

Barcless has a vibrant personality and brings that positive attitude to the ice, and it’s her work ethic that has allowed her to become a better player.

“When I started as a freshman, I had never seen a weight room,’’ joked Barcless. “I am a much stronger player and a much smarter player. You have to have your brain working as fast as your feet.’’

Barcless played three years of soccer at Wilkes, but coming off an injury she wasn’t ready for spring soccer and then with a new ice hockey coach she just wanted her focus to be be on the ice.