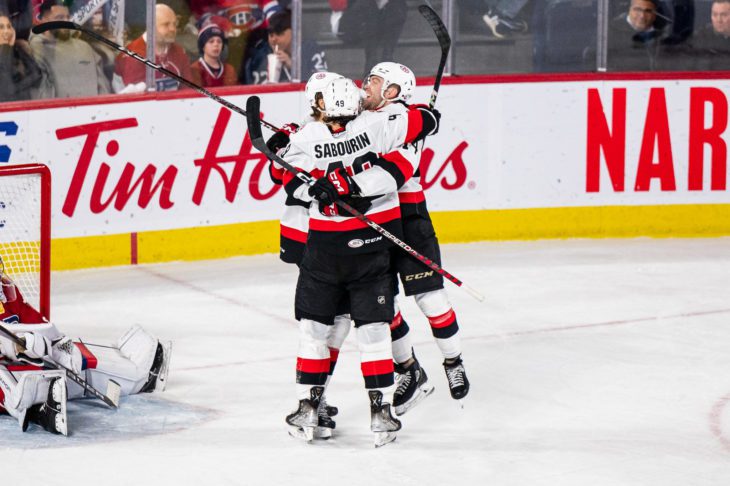 A Scott Sabourin game-winner lifted the Belleville Senators back into the win column with a 2-1 overtime victory over the Laval Rocket at Place Bell on Wednesday night.

Following an excellent chance from Rourke Chartier on a partial breakaway, Laval opened the scoring with 1:26 remaining in the first period when Joël Teasdale tallied on the power play to take a 1-0 lead after twenty minutes of play.

After a scoreless middle frame, the Rocket thought they extended their advantage through an Anthony Richard marker. However, the goal was disallowed due to a kicking motion. Later in the stanza, Belleville evened the score at the 9:24 mark as Jake Lucchini found the back of the net with a beautifully placed shot on the man advantage to force extra time.

After an impressive breakaway save from Kevin Mandolese early in overtime, the aforementioned Sabourin notched the decisive winner, helping the Senators secure a critical two road points against a divisional rival.

Belleville returns to action Friday night when they visit the Springfield Thunderbirds, with puck drop scheduled for 7:05 p.m from MassMutual Center.

Sound Bytes: Head Coach Troy Mann: “I do feel that we’ve been close on many occasions, against some of the better teams in the league, on a tough stretch, but we hung in there. Tonight was one of those games as well.”

Ticket info: Tickets for all Belleville Sens home games are available via Ticketmaster or at the CAA Arena Box Office.