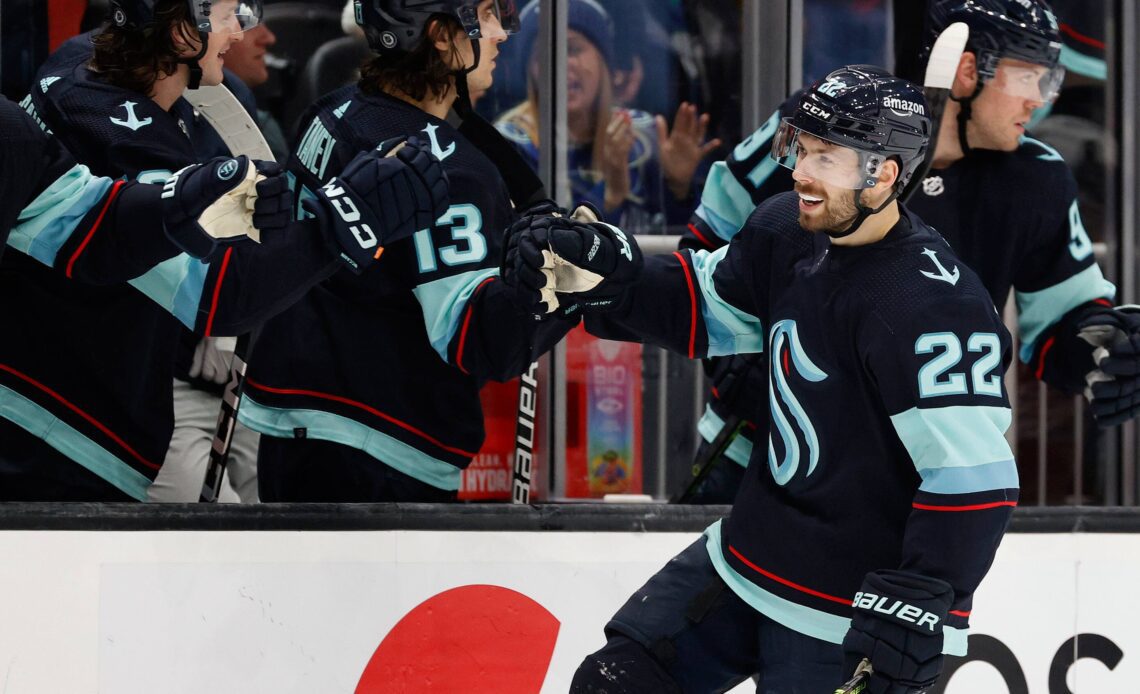 Oliver Bjorkstrand had his first multi-goal game of the season to lead the Seattle Kraken past the visiting Vancouver Canucks 6-1 on Wednesday night for their first win in franchise history over their Pacific Northwest rivals.

Seattle picked up its 28th victory and 61st point in its 47th game of the season, surpassing the win and point totals from the Kraken’s expansion season last year when they managed just 27 victories and 60 points.

And they did it in convincing fashion, thumping the Canucks after losing the first six matchups since joining the NHL.

Bjorkstrand started Seattle’s big night with his eighth of the season at 7:57 of the first period. His second goal came at 16:15 of the second and gave Seattle a 5-0 lead. It was Bjorkstrand’s first multi-goal game since Jan. 8, 2022, when he scored a pair for Columbus against New Jersey.

Seattle defeats Vancouver 6-1 to claim their first win in franchise history over their Pacific Division rivals.

Jared McCann added his team-high 23rd of the season on the power play. Alex Wennberg also scored a power-play goal and Eeli Tolvanen’s one-timer was his sixth goal in 13 games since being picked up by Seattle off waivers.

Ryan Donato added his 12th early in the third period, his fourth goal in the past three games after going eight games without one.

Martin Jones made 19 saves for Seattle.

Conor Garland scored his ninth of the season in the closing seconds of the second period, but it was an otherwise miserable night for the Canucks. Spencer Martin made 29 saves.

Rick Tocchet’s second game in charge of the Canucks after taking over for fired coach Bruce Boudreau was far different than his debut a night earlier when Vancouver thumped Chicago.

The Canucks were sloppy and took two careless penalties that led to Seattle goals.

Seattle needed just eight seconds after Andrei Kuzmenko was penalized for hooking for Wennberg to make it 2-0 less than 10 minutes into the first period. The Kraken extended it to 3-0 on McCann’s goal after Tyler Myers was called for interference barreling through Matty Beniers away from the play.

Beniers was noticeably shaken up after the hit and played later in the period, but did not play in the third.

The Canucks host Columbus on Friday.