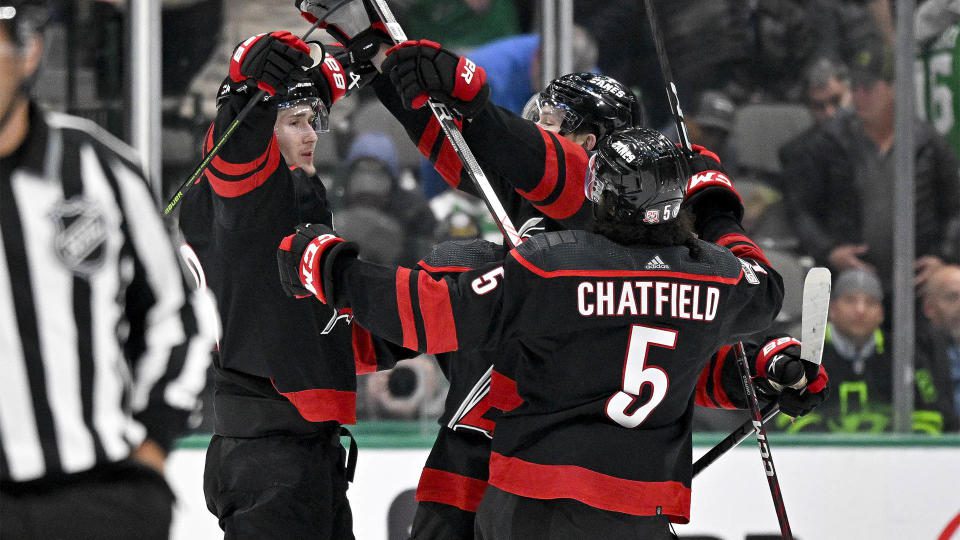 DALLAS – Martin Necas scored 1:34 into overtime to give the Carolina Hurricanes a 3-2 win over the Dallas Stars in a matchup of division leaders Wednesday night.

Sebastian Aho had a short-handed goal and Brent Burns also scored for the Hurricanes, who lead the Metropolitan Division in the Eastern Conference. The game-winner was Necas’ 19th goal this season.

Dallas is still atop the Western Conference, and the Central Division, after its second consecutive 3-2 overtime loss at home. Jason Robertson scored his 33rd goal for the Stars, and 19-year-old rookie Wyatt Johnston got his 13th.

Carolina goalie Frederik Andersen didn’t return after the first intermission because of an upper-body injury, soon after a strange sequence that ended with Robertson scoring on a shot from what seemed to be an impossible angle.

The puck was bouncing on the ice behind Andersen and settled against the post after Tyler Seguin‘s shot before the goalie was able to swipe it away to his right. Robertson then shot from behind Andersen, and the puck apparently ricocheted off him and into the net for a 2-1 Dallas lead. Robertson’s 33rd goal matched his assists total.

Antti Raanta replaced Andersen and stopped all 15 shots he faced – none in overtime – after the starter had four saves. Raanta had to shake off getting struck in the head by Mason Marchment‘s stick when the Stars forward was behind the net fighting for the puck midway through the third period.

Stars goalie Jake Oettinger stopped 22 shots, including a glove save of Andrei Svechnikov‘s wrister with just more than five minutes left in regulation.

Aho’s 200th career goal put Carolina up 1-0 midway through the first period. The Stars got even just more than two minutes later when Johnston scored unassisted after a faceoff.

Johnston also had a shot ricochet off the post with just under six minutes left.

In between the first two goals, Oettinger went into a fully extended split, with his right skate against the post, to deny Paul Stastny‘s attempt to knock in a loose puck.

Burns tied the game at 2 in the second period, getting the puck after a faceoff, then skating over the top of the circle and scoring top shelf over Oettinger’s left shoulder.

NOTES: Marchment was coming out of the penalty box at the same time Carolina made an errant pass in the second period. He had a breakaway attempt, but couldn’t get enough control of the puck to get off a quality shot. … Hurricanes defenseman Brett Pesce…