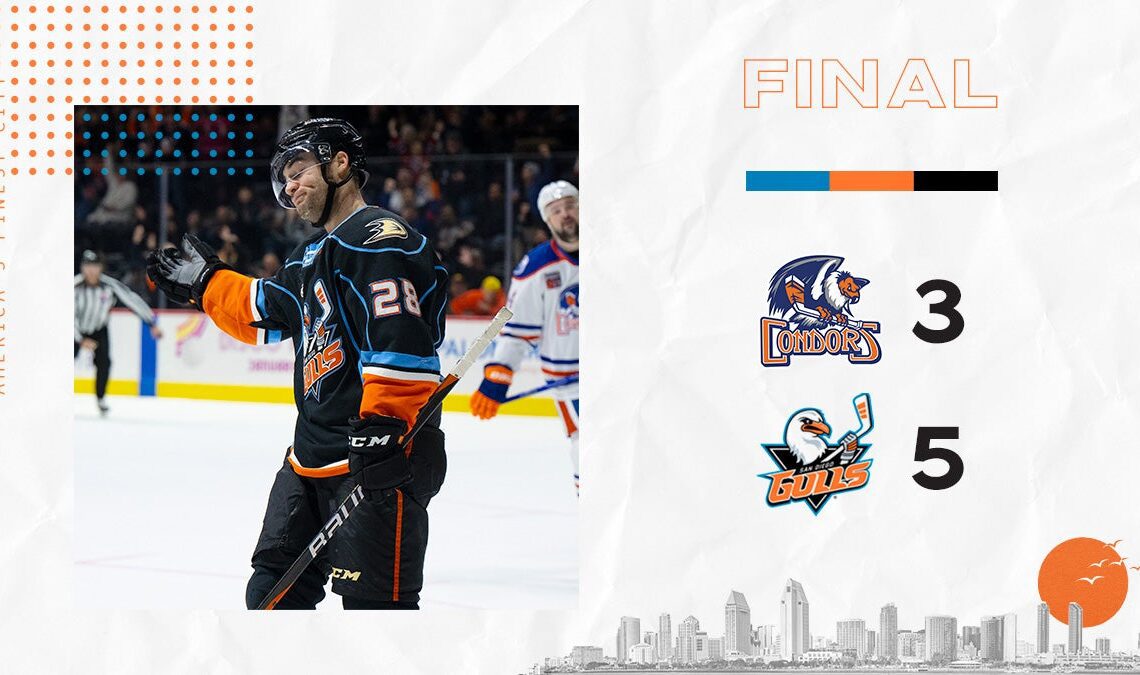 The San Diego Gulls continued their recent stretch of strong play at Pechanga Arena San Diego, grounding the rival Bakersfield Condors 5-3 tonight on home ice. The win snaps a five-game losing skid for the Gulls, who pulled within seven points of Bakersfield in the ever-tightening Pacific Division race.

A determined San Diego squad came out of the gates looking for offense, with Del Zotto netting the game’s first goal just 1:32 into the opening frame.

Grimaldi started the rush, taking a pass from David Cotton and carrying the puck into the Bakersfield end. Del Zotto split the defense and received a short pass from Grimaldi, firing a shot over the glove of Condors netminder Calvin Pickard from the slot for his sixth goal of the season.

Since joining the Gulls on Dec. 19, Del Zotto’s 4-8=12 points leads all team defensemen and outpaces his production in 25 games with the Charlotte Checkers (2-8=10) earlier this season.

San Diego’s penalty kill – a strength all season – extended their lead to two later in the opening frame. Gawdin collected a loose puck in the offensive zone, battling three different Bakersfield skaters for possession. The center curled off the wall and found an open Grimaldi, who found open ice in the slot. He took Gawdin’s pass and quickly spun around, firing a shot past Pickard for his 15th goal of the season.

Grimaldi, who earlier this season matched the team record for most shorthanded goals in a game and a single period, collected his third man-down tally of the season. His three shorthanded goals are tied for the league lead, and his tally marked the Gulls’ sixth shorthanded goals over the last 11 games (Dec. 30, 2022 – Jan. 25, 2023).

Bakersfield responded late in the period as Noah Philp finished off a 3-on-2 rush to cut the Gulls’ advantage to one. It marked the lone blemish in a stellar start for San Diego, who fired a season-high 16 shots on net in the opening frame. The team only allowed four, matching a season low.

“Well, it’s been kind of the opposite,” Gulls head coach Roy Sommer said. “Every time we played these guys, they’ve jumped…