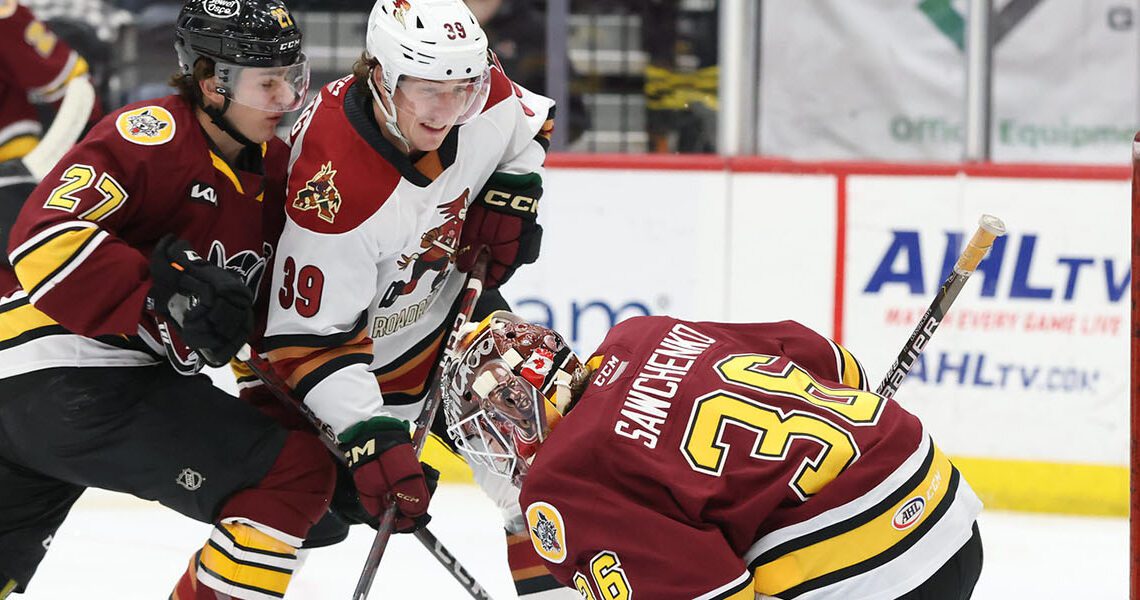 The Chicago Wolves wrapped up their longest road trip of the season with a 4-1 loss to the Tucson Roadrunners on Wednesday night in Arizona.

Cavan Fitzgerald scored his first goal of the season for the Wolves but the defending Calder Cup champions fell as the Roadrunners got goals from Bokondji Imama, Hudson Elynuik, Laurent Dauphin and Adam Cracknell.

Tucson swept the back-to-back games in Arizona and the Wolves finished the six-game road swing with a 2-4-0-0 record.

The Roadrunners reeled off consecutive goals by Imama, Elynuik and Dauphin in the opening period and the Wolves couldn’t recover.

Chicago did make it close early in the second on Fitzgerald’s goal. The defenseman completed a terrific passing play that started when Tuukka Tieksola found Jamieson Rees deep in the Roadrunners zone. Rees then put a pass right on the tape of Fitzgerald in the slot and he banged in a forehand past goaltender Ivan Prosvetov. The assist gave Rees a three-game points streak (three goals, assist).

Cracknell put the game out of reach with an empty-net score in the waning moments.

Zachary Sawchenko (36 saves) suffered the loss in goal for the Wolves while Prosvetov (21 saves) earned the win for Tucson.

Up next: The Wolves will host the Rockford IceHogs on Saturday at Allstate Arena (7 p.m.; My50 Chicago, AHLTV). It will be Adopt-A-Dog Night, Superhero Night and the first of two Mental Health Awareness jersey auctions.

For information on Wolves ticket plans for the 2022-23 season — everything from single-game tickets to Flex Packs to group outings — visit ChicagoWolves.com or call 1-800-THE-WOLVES.