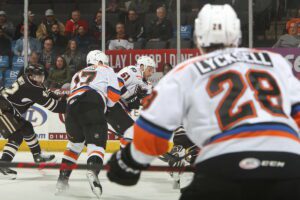 Lehigh Valley, PA – Elliot Desnoyers (14th) and Hayden Hodgson (2nd) had a pair of equalizers for the Lehigh Valley Phantoms but visiting Hershey pulled away in the third period breaking a 2-2 tie with a three-goal surge for a 5-2 victory on Wednesday night at PPL Center. Joe Snively (4th, 5th) and Mason Morelli (6th, 7th) led the way for the visitors with each scoring a pair of goals.

Lehigh Valley (19-15-5) had its three-game win streak come to a close as they sustained just their second regulation loss in nine games in January (5-2-2). The Phantoms were opening a season-long five-game homestand that will include two more encounters with their rivals from Chocolatetown.

Hershey (27-8-5) struck first early in the opening period, but Hershey’s lead lasted only 2:08 as two highly touted prospects traded blows for their respective clubs. Connor McMichael opened the scoring only 1:15 into the game after depositing the rebound of a Dylan McIlrath shot at 1:15.

Lehigh Valley drew even barely more than two minutes later as the Phantoms were rewarded for a strong offensive zone forecheck. Max Willman and Jordy Bellerive did yeoman’s work beneath the goal line in Hershey’s defensive zone to setup an open Elliot Desnoyers between the face-off circles. Desnoyers beat Bears goaltender Zach Fuale between the pillows, low to the ice for the equalizer. The tally marked Desnoyers’ team-leading 14th goal of the season. Entering the contest, he was tied for the team-lead with Tyson Foerster at 13 goals apiece. Both young prospects celebrated their 21st birthday last week.

The Bears had just two shots on goal for the rest of the first period, a stretch of 18:45 in which the Phantoms largely dominated.

Tied 1-1 going into the second period, Samuel Ersson made a strong stop on Hershey’s Ethen Frank with only nine seconds gone by in the new frame. The Phantoms remained under siege in their own end and Hershey recaptured a 2-1 lead on an ensuing power-play chance.

After a delay of game minor at 5:21, Joe Snively buried a drive on the back door from the right circle to finish a tic-tac-toe passing play into an open cage at 6:47. Henrik Borgstrom and Garrett Pilon earned the helpers on the go-ahead marker. But once again, Lehigh Valley responded to erase their skinny, one-goal deficit.