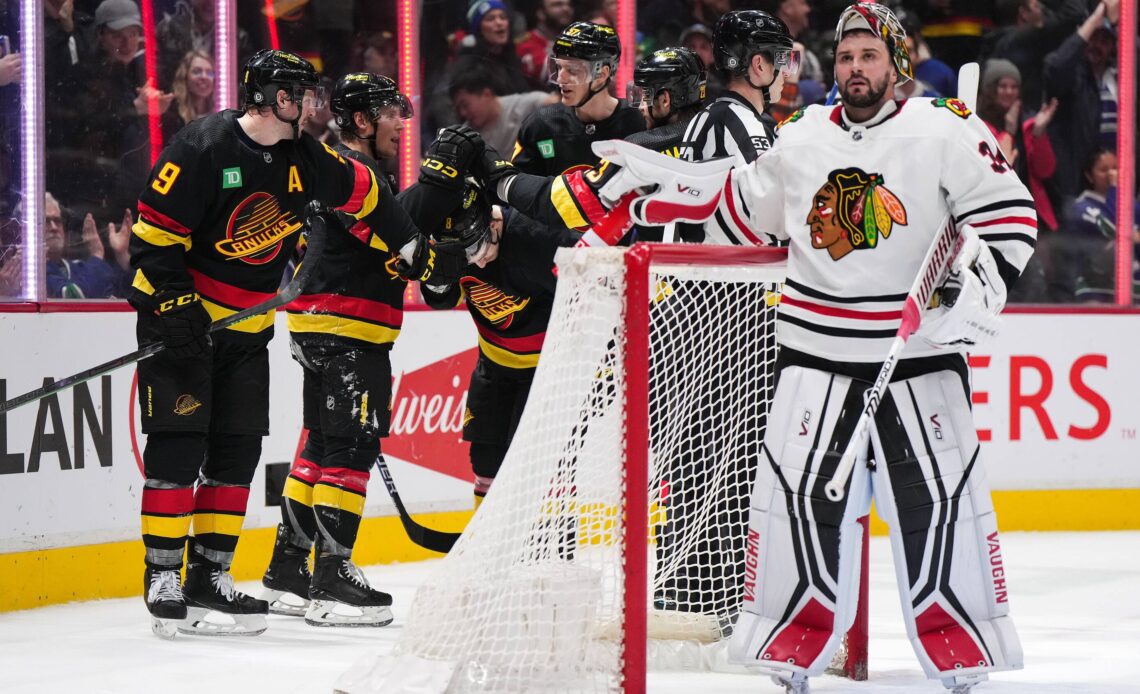 Dakota Joshua and Sheldon Dries scored goals 34 seconds apart in the third period as the Vancouver Canucks battled back from two one-goal deficits to defeat Chicago 5-2 and give Rick Tocchet a win in his first game as Vancouver’s head coach.

Tocchet was named the Canucks 21st head coach on Sunday after Bruce Boudreau was fired along with assistant coach Trent Cull. The Canucks hired Adam Foote as an assistant coach and Sergei Gonchar as a defensive development coach.

There was a mixture of boos and cheers when Tocchet was introduced to the crowd during the first period. The game was just 3:30 old when a fan threw a Canucks jersey on the ice.

The Canucks outshot Chicago 48-14 and failed to score on five power-play chances.

Andrei Kuzmenko scored twice for the Canucks (19-25-3) who snapped a three-game losing streak. Elias Pettersson had two assists, giving him six goals and 22 assists in the last 16 games. Bo Horvat also scored shorthanded into an empty net at 18:34, matching a career high of 31 goals in a season.

Sheldon Dries puts his stick between his legs and fires in a rebound while falling in Vancouver’s 5-2 victory over Chicago. Rick Tocchet picks up a win in his debut as head coach for the Canucks.

Petr Mrazek made 43 saves for Chicago.

The Canucks go-ahead goal came just seconds after Kane whiffed on a good scoring chance in the Canuck end.

The firing of Vancouver Canuck’s head coach Bruce Boudreau has sparked outrage amongst some fans who are blasting the organization’s handling of the process, which was drawn out over weeks of speculation.

Defenceman Quinn Hughes sent the puck up the ice. Brock Boeser tried to bank a shot in from a sharp angle. Mrazek stopped the puck but Joshua chipped it over the sprawled goalie for a 3-2 lead at 11:34.

On the following faceoff, Mrazek stopped a Conor Garland shot. Dries directed the rebound into the net with a shot from between his legs.

Kuzmenko scored his 20th and 21st goals in the second period to tie the game 2-2 after 40 minutes.

His first goal came off the rebound of Ilya Mikheyev’s shot to tie the game 1-1 at 7:02.