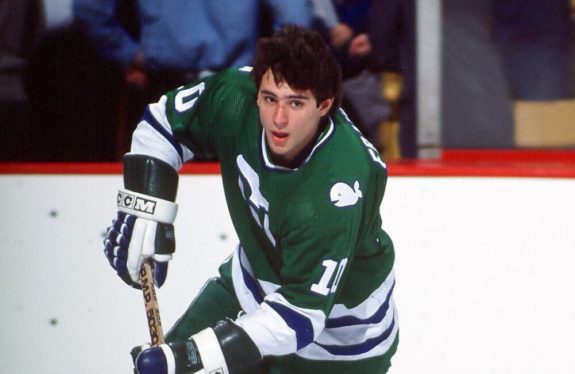 The numbers 200 and 400 showed up numerous times on this date through National Hockey League history. In addition, there were a handful of events and feats to happen for the first time and some memorable All-Star Game moments. It is time for a daily look back in time at all the big stories from Jan. 25 over the years.

Gordie Howe scored a goal and added two assists on Jan. 25, 1953, to give him 400 regular-season career points as the Detroit Red Wings and Montreal Canadiens skated to a 3-3 tie. Alex Delvecchio had a big night by picking up an assist on all three Detroit goals.

New York Rangers legend Rod Gilbert recorded the 200th assist of his career on Jan. 25, 1969, in a 3-0 win over the Chicago Blackhawks. Goaltender Ed Giacomin earned his 21st NHL shutout.

On that same night, Glenn Anderson picked up the 400th assist of his career in the Edmonton Oilers’ 6-3 home loss to the Blackhawks.

Cam Neely lit the lamp for the 200th time in his career and had added an assist on Jan. 25, 1990, as the Bruins won 5-2 over the visiting New York Islanders.

On Jan. 25, 1994, Jeremy Roenick scored his 200th NHL goal and added an assist as the Blackhawks won 5-0 in Detroit. Goaltender Eddie Belfour picked up the 20th shutout of his career in the victory.

Firsts in the NHL

A 21-year-old Phil Esposito scored his first NHL goal on Jan. 25, 1964, during the Blackhawks’ 5-3 loss at the Red Wings. He beat fellow future Hall of Famer Terry Sawchuck to find the back of the net for the first time. He scored 74 goals with Chicago before he was traded to Boston in 1967. He retired with 717 goals, the sixth-most in league history.

Islanders defenseman Denis Potvin scored his first NHL hat trick and added an assist on Jan. 25, 1975, in a 5-5 tie with the Los Angeles Kings.