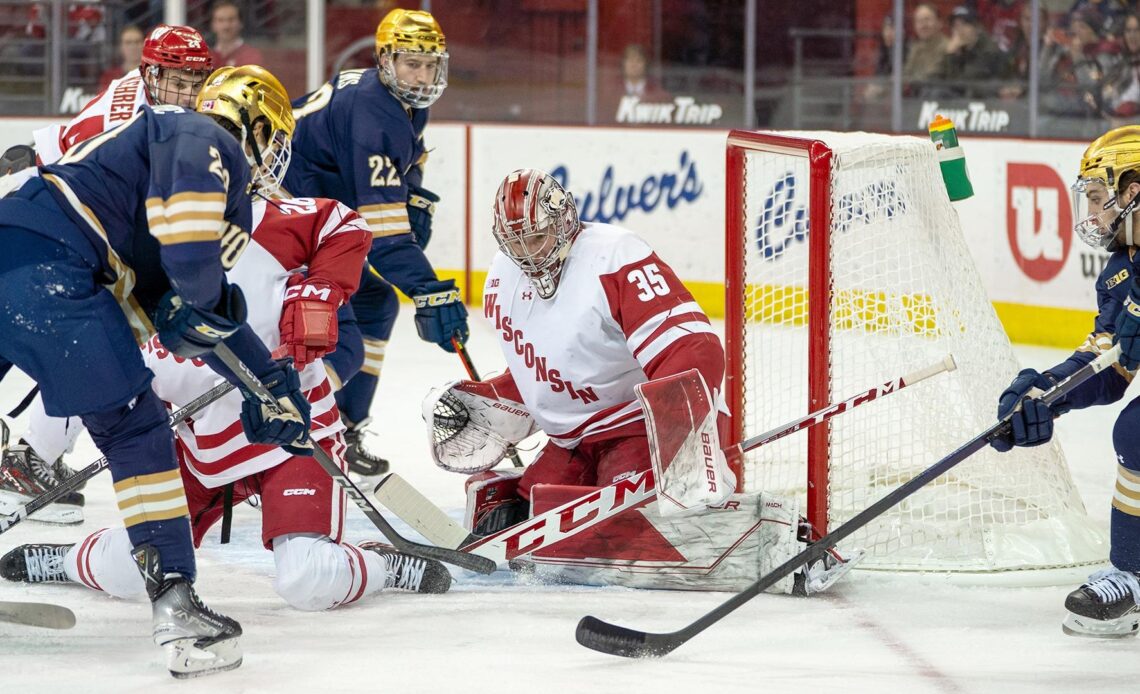 MADISON, Wis. — The Wisconsin men’s hockey team is on the road this week as they head to South Bend, Indiana, to take on the Notre Dame Fighting Irish in a two-game series.

Here are six quick things to know before tuning in:

1 – HOLY-MOE-LY: Senior goaltender Jared Moe notched his fourth shutout of the season and fifth as a Badger with 22 saves in Wisconsin’s 4-0 victory over No. 7/8 Ohio State on Jan. 20. He allowed just one goal in the series to claim Big Ten Second Star of the week. Moe’s four shutouts this season rank

Just one goal against last weekend vs. No. 7 Ohio State, and two goals or fewer in five of his last six games (3 shutouts) for Jared Moe@MoeJared and the Badgers are 🔒ing down their end of the ice pic.twitter.com/A85xPnLlgw

2 – LaMASTER CLASS: Junior defenseman Luke LaMaster netted his first goal in his 52nd career game in what became the game-winning goal against Ohio State. Center Owen Lindmark won an offensive zone faceoff back to LaMaster, who beat the Buckeyes’ goaltender with a wrister on his glove side off the post and in.

Ping! When your first career goal is the game-winner 🙌

How it all went down last night for @LukeLaMaster pic.twitter.com/vA4REvGI0N

3 – SLAY DONOVAN: Another Badger checked off a career milestone against Ohio State! Senior forward Shay Donovan tallied his first point for the Cardinal and White with a secondary assist on a goal from Jack Gorniak on Jan. 20. Donovan led the breakout in the defensive zone with a pass up the wing to Sam Stange, who set up Gorniak on a two-on-one.

Gorniak nets his 3rd of the season, assisted by Stange and Donovan! pic.twitter.com/iVis0Nl3sp

4 – SEVEN STRAIGHT: Freshman star Cruz Lucius extended his point streak to seven games with a goal in the third period to cap off the Badgers’ shutout win over Ohio State. In that stretch, Lucius tallied two goals and 10 assists for 12 points, including an impressive four-point night over Notre Dame on Jan. 7. The Carolina Hurricanes draft-pick leads the Badgers’ roster with 24 points (9g, 15a) in 24 games.

Unfortunately, Lucius’ streak came to an end the following night on Jan. 21 when Ohio…