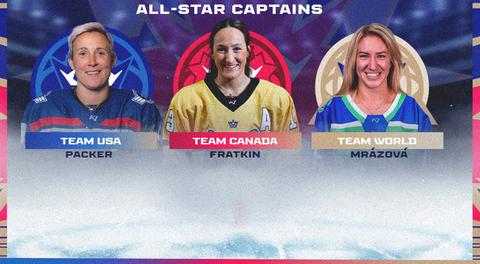 BOSTON, MA – (January 25, 2023) – The Premier Hockey Federation (PHF) has announced its three All-Star captains for the upcoming showcase event on Sunday, January 29 in Toronto, Ontario. Madison Packer of the Metropolitan Riveters has been selected to lead PHF Team USA, Kaleigh Fratkin of the Boston Pride heads PHF Team Canada, and Kateřina Mrázová of the Connecticut Whale will wear the ‘C’ for PHF Team World with national pride on the line in the round-robin competition and championship at Mattamy Athletic Centre.

“This year’s captains were each selected by their All-Star teammates to represent them on this stage, which is a credit to their skill, experience, leadership, character, and how well-respected they are among their peers,” said Reagan Carey, PHF Commissioner. “Both Madison and Kaleigh have helped build the league since its inaugural season, and Kateřina was one of the league’s first international stars before the recent wave of incoming talent from overseas. Congratulations to all three captains who are most deserving of this honor, and best of luck this weekend!”

Packer will be making a record sixth All-Star appearance in Toronto and will serve as an All-Star captain for the second time following the 2020 event in Boston. The 31-year-old forward from Detroit, MI has now served as Riveters captain for four seasons. She won the Isobel Cup in 2018 and has scored 60 goals and 119 points over eight PHF seasons which both rank second on all-time lists. Her 123 career regular season games are third-most among all skaters. Internationally, Packer won back-to-back gold as a member of the 2008 and 2009 U.S. National Women’s U18 Team before attending the University of Wisconsin where she won an NCAA title with the Badgers in 2011.

“It’s always an honor to be included in the All-Star weekend,” said Packer. “I appreciate the nod from my fellow U.S. All-Stars, and have to give a shout out to Jillian Dempsey. There was a tie twice between her and me after our team voted and she passed the torch to me so I could enjoy this one with my kiddos. I want to acknowledge and thank her for that, and a huge congratulations to everyone selected. I think this format will make for a very fun and competitive weekend.”

Fratkin is now a five-time All-Star and first-time captain. Like Packer, she’s played in all eight PHF seasons accumulating 129 games to date which is…