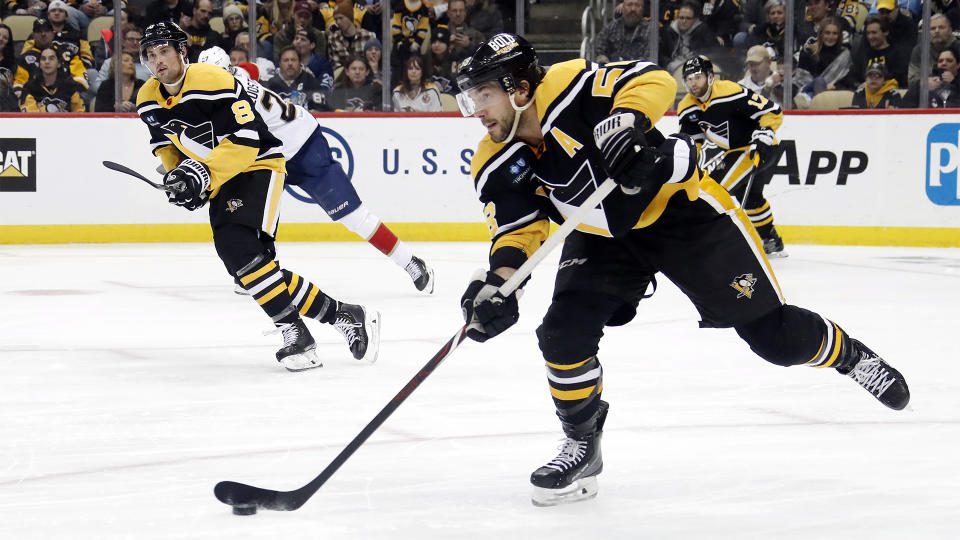 PITTSBURGH – Amid a nightmarish season off the ice, Kris Letang has been searching for joy. A sense of normalcy.

He found a little of both.

The veteran Pittsburgh defenseman scored twice in his return from a lower-body injury, the second with 54 seconds left in overtime to give the Penguins a 7-6 victory over Florida.

“I was just happy to be out there,” Letang said. “Be in the atmosphere of the team.”

Letang’s 17th season with Pittsburgh has been pockmarked by health issues and a profound sense of loss. He missed two weeks after suffering the second stroke of his career shortly after Thanksgiving. He then tweaked something in a loss to Detroit on Dec. 28.

His father died unexpectedly a few days later, and Letang spent an extended amount of time with his family in his native Montreal, with his teammates making an unexpected stop to join Letang for his father’s wake at the end of a West Coast swing earlier this month.

The Penguins activated him off injured reserve on Tuesday afternoon. Letang responded with four points in a rollicking game that featured 13 goals, the last Letang’s one-timer from just above the left circle on the power play that gave Pittsburgh just its fourth win in 12 overtime games this season.

“It was kind of surreal, you know?” Letang said. “I didn’t know what to think or how it was going to go. These guys supported me for the last month… it’s just great to be back.”

The Penguins, currently in the eighth and final playoff spot in the Eastern Conference, opened up a small bit of breathing room over the ninth-place Panthers by beating Florida for the 18th time in its last 21 trips to Pittsburgh.

Evgeni Malkin, Sidney Crosby and Danton Heinen each had a goal and two assists for The Penguins. Rickard Rakell and Drew O’Connor also scored for the Penguins.

Casey DeSmith struggled in place of Tristan Jarry, a late scratch with an upper-body injury. DeSmith stopped 33 shots, including both he faced in overtime, to win for the third time in his last 10 starts.

“That was a huge two points for us,” DeSmith said. “Obviously we’re battling with them in the standings. Character win at home.”

Carter Verhaeghe scored twice for Florida, including a tying goal with 2:32 left in regulation. Aaron Ekblad had a goal and two assists. Matthew Tkachuk and Sam Reinhart each had a goal and an assist. Colin White‘s sixth goal of the season 4:10 into the third gave the Panthers the lead but Florida couldn’t hold…