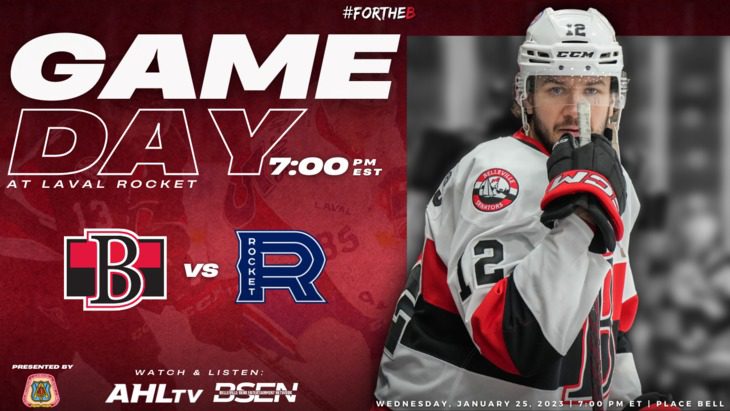 With a two-week, six-game homestand behind them, the Belleville Senators hit the road tonight trying to start the climb out of the AHL’s North Division basement. The Sens went just 1-4-0-1 on their recent stint at CAA Arena and now sit in 7th place, four points back of the playoff cutline, occupied by tonight’s opponent, the Laval Rocket. Much like other teams in the division, the Rocket have been trending upward, collecting points in four straight games, most recently, a 4-3 shootout loss at home to Toronto last Saturday, and will likely have the support of a boisterous crowd at place Bell tonight.

Tonight’s matchup is the eighth of 12 between the Sens and Rocket this season. Belleville has faired well against their Canadian rivals from La Belle Province, at 5-2-0-0, but Laval picked up a win in their last meeting, back on December 10, 2022. In 63 lifetime meetings with Laval, Belleville is 34-26-1-2, with a 15-16-1-0 record at Place Bell.

The NHL recall carousel has continued to turn as the Ottawa Senators returned Jacob Bernard-Docker and Rourke Chartier over the weekend. Chartier will slot in on the top line between Angus Crookshank and Egor Sokolov, taking the place of Ridly Greig, who was called up by the parent club on the weekend as well. Greig, who has been among Belleville’s best players of late and is expected to make his NHL debut tonight when Ottawa hosts the New York Islanders. Bernard-Docker will join his usual defence partner, Dillon Heatherington. Lassi Thomson has also been cleared to return after missing 11 games with an upper-body injury but has only had one practice since getting the OK from team medical staff, and likely won’t dress tonight.