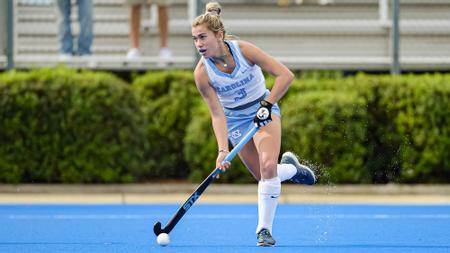 UNC freshman Ashley Sessa is one of four Tar Heels selected to represent the U.S. in upcoming FIH Hockey Pro League play in New Zealand and Australia. Sessa joins alums Ashley Hoffman, Meredith Sholder and Cassie Sumfest as part of the 24-player roster for the trip.

The selections were made following a 12-day training camp at the Chula Vista Elite Athlete Training Center in Chula Vista, Calif.

The U.S. Women’s National Team, ranked No. 16 in the world, will play eight total matches, two each against No. 2 Argentina, No. 3 Australia, No. 9 New Zealand and No. 10 China.

From the 24 athletes are traveling to New Zealand and Argentina, 18 will be selected prior to each game to make up the competition roster.

The first four matches will take place in Wellington, New Zealand., with the next four to be held in Hobart, Australia.

This will be the team’s first competition since June of 2022.

Games will stream live on Watch.Hockey.