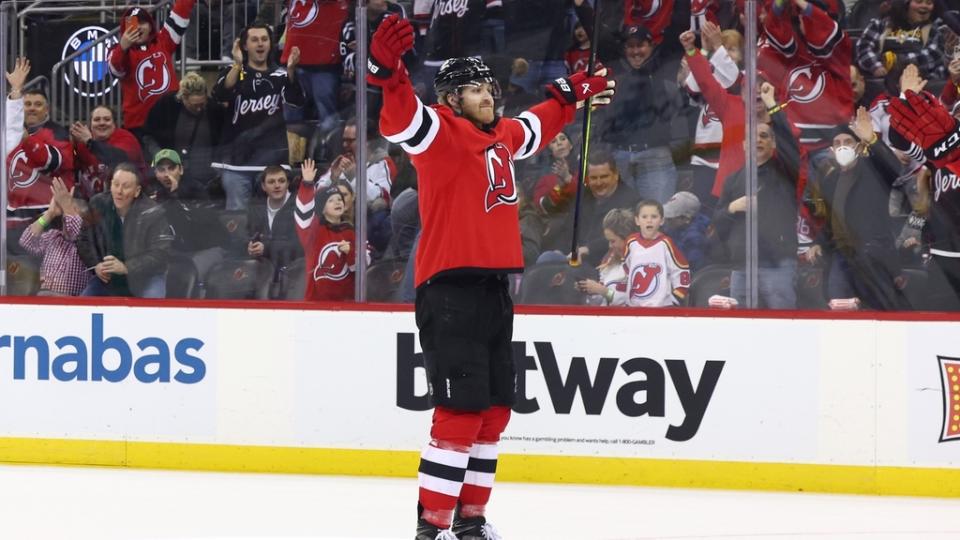 NEWARK, N.J. (AP) — Dougie Hamilton scored late to tie the game and netted a power-play goal with 1:06 left in overtime to lead the New Jersey Devils to a 3-2 win over the Vegas Golden Knights on Tuesday night.

Ondrej Palat also scored and Vitek Vanecek made 28 saves as the Devils improved to 7-0-1 in their last eight games. Vanecek has won a career best eight games in a row, becoming New Jersey’s first goalie to do that since Martin Brodeur in 2007-08.

Ben Hutton and William Karlsson scored for the Golden Knights, who are 2-5-1 in their last eight games. Rookie All-Star Logan Thompson had 35 saves for Vegas.

Hutton was in the penalty box for tripping when Hamilton netted his 13th goal of the season with a shot from between the circles. He also scored in overtime on Sunday to allow New Jersey to beat Pittsburgh.

Hamilton tied the game with 1:10 to play with a shot from the right point that seemed to be deflected by a defenseman.

Hutton and Karlsson had given the Golden Knights a 2-1 lead with goal less than three minutes apart in the second period.

Palat gave the Devils the lead 3:58 after the opening faceoff. He took a drop pass from Nico Hischier and got lucky when his shot in close was deflected by defenseman Kaedan Korczak and fluttered over Thompson’s waving glove.

The teams will play again in Las Vegas on March 3. … Golden Knights F Mark Stone missed his fifth straight game with an upper body injury. … Golden Knight F Brett Howden played in his first game since Nov. 23. He was activated off long-term injured reserve. … Vegas is now 15-4-3 on the road

Devils: at Nashville on Thursday night.