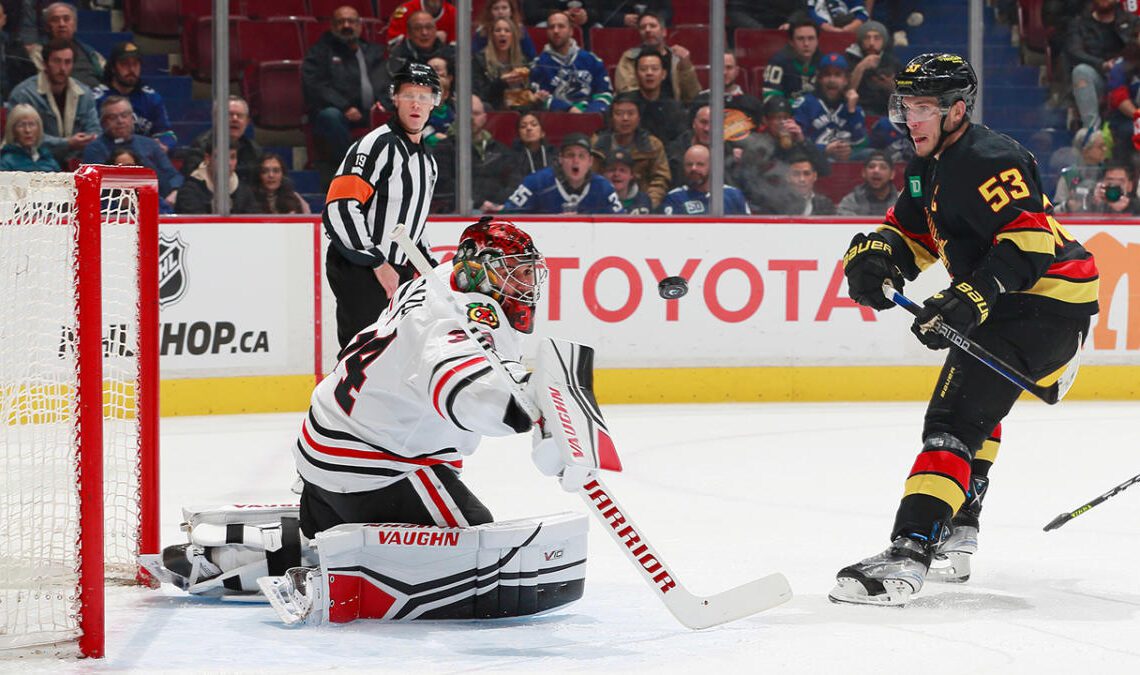 The Blackhawks fell to the Vancouver Canucks 5-2 at Rogers Arena on Tuesday.

1. The Canucks dominated in shot attempts (80-34), shots on goal (48-14), scoring chances (46-15) and high-danger chances (22-6), per Natural Stat Trick. The Blackhawks’ 14 shots was a new season-low, and the 46 scoring chances against and 22 high-danger chances against were tied for their second-highest totals of the season. A very lopsided stat sheet.

2. Petr Mrazek saved 1.87 goals above expected in the first period, where he faced eight high-quality chances and stopped all 21 shots. It was easily his best period of the season. He finished the job with 43 saves on 47 shots for a save percentage of .915. If it wasn’t for Mrazek, things could’ve been really ugly for the Blackhawks.

3. The Blackhawks spent six of the first eight and a half minutes on the penalty kill after Jake McCabe committed a tripping penalty 28 seconds in and Seth Jones sat for four minutes right after because of a high-sticking penalty. The Canucks did everything but score on their three opportunities. In fact, the Blackhawks killed off all five penalties on the night.

4. The game was somehow tied 2-2 through 40 minutes, and the Blackhawks had an opportunity to score the go-ahead goal in the third period but Andreas Athanasiou didn’t get much of the puck on his one-timer opportunity during a 2-on-1. The Canucks immediately went the other way and scored, and then struck again 34 seconds later. Tough turn of events.

5. Max Domi came to Patrick Kane’s defense in the second period after Canucks forward Dakota Joshua laid a hit on Chicago’s superstar. I appreciate that Domi has basically become Kane’s unofficial bodyguard, but that probably wasn’t a hit that warranted a scrap nor was it the right time. It was a clean hit and not really a big one either, and Domi had to sit for 17 minutes because of it (2 for instigating, 5 for fighting and a 10-minute misconduct).

6. Collin Delia started in goal for the Canucks against his former team. He’s appeared in only 10 NHL games this season and his save percentage doesn’t look great, but he’s actually had a solid campaign. I don’t think he’ll like the second goal against, but he sure did probably enjoy picking up a win against the Blackhawks.

7. How about the month Sam Lafferty is having? He scored his…