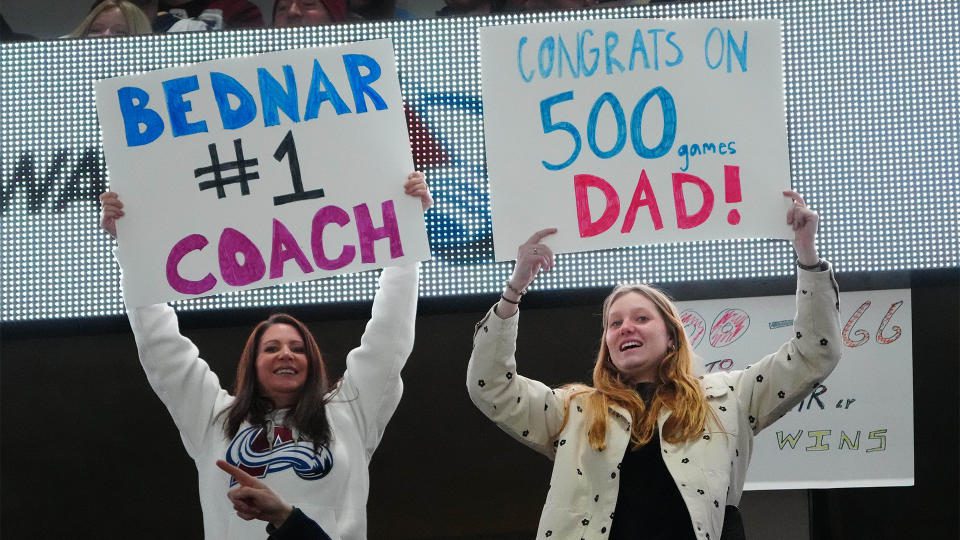 Logan O’Connor added two assists, Nathan MacKinnon had an assist for his 700th point and Alexandar Georgiev made 37 saves in the Avs’ season-best sixth straight victory. They moved into third place in the Central Division, one point ahead of Minnesota.

Bednar, coaching his 500th game for Colorado, improved to 266-185-49 and passed former Quebec Nordiques boss Michel Bergeron for the most coaching victories in franchise history.

Alex Ovechkin returned from an injury to score his 31st goal for Washington. Conor Sheary also scored and Kuemper stopped 23 shots in his first game in Denver since helping the Avalanche win the Stanley Cup in June.

The crowd stood and applauded after a first-period video tribute for Kuemper, who won 37 games in the regular season and 10 more in the playoffs.

The Avs chose not to re-sign Kuemper, who then inked a five-year deal with the Capitals in July.

He had his moments against his former team, including nifty glove saves against Jacob MacDonald and Lehkonen in the second period to keep it a one-goal game. But Newhook’s goal with 4:21 left in the second made it 3-1.

The depleted Capitals dominated the third period but still lost for the fifth time in seven games.

Ovechkin’s one-timer at 9:44 of the third was his 811th goal after he missed his first game of the season Saturday with a lower-body injury. But Washington was without T.J. Oshie, who left to be with his wife for the birth of their fourth child. And Nicklas Backstrom was a late scratch with a non-COVID illness.

Then Tom Wilson exited in the second period after blocking a shot and underwent an X-ray between periods.

The Avalanche, who haven’t trailed during their win streak, solved Kuemper at 8:57 of the first when MacKinnon absorbed a big hit from Dmitry Orlov and fed Lehkonen for his 15th goal and sixth in six games.

Cogliano redirected Kurtis MacDermid‘s shot 2:04 into the second to make it 2-0. Sheary cut the. lead in half when he tipped in Martin Fehervary‘s shot for his 12th goal just over two minutes later.

HE BROKE THE CUP

It also marked the return of Washington’s Nicolas Aube-Kubel, who had 22 points in 67 games for the Avs in 2021-22, He’s remembered for dropping and denting the Cup during the on-ice…