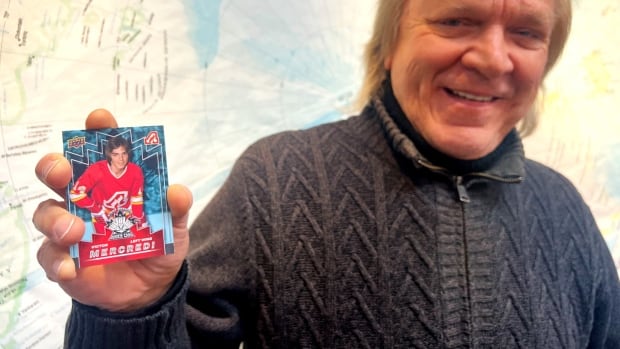 It took 50 years, and it was worth every minute for Vic Mercredi to see his face on an NHL rookie card.

Mercredi is one of eight Indigenous NHLers to be featured in the First Peoples Rookie Card series, from trading card company Upper Deck. He still plays hockey casually with his kids and grandkids, but it’s been five full decades since he was drafted by the Atlanta Flames.

The picture on his card features a young Mercredi — a photo taken back during his first day of training camp, for the purpose of cards and programs.

“It is quite an honour to have something like that at this point in my life.”

As word of the card spread, Mercredi said his family members and friends have been calling him up at his home in Yellowknife to congratulate him.

“It’s been well-received, so obviously I’ve got to get the cards out to them,” he said. “For my grandkids, actually, when they first looked at it they had no idea who this person was.”

Mercredi is Métis. He was 20 when he was drafted in 1973, and was the first hockey player born in the N.W.T. to play in the NHL.

He recalled separating his shoulder in his first year with the league. Though the muscles healed, it wasn’t until two and a half years later that he discovered he had a broken shoulder bone — a factor that led to him leaving the NHL.

“I just decided that the opportunity wasn’t there any more. I was married, we had a child, and I just didn’t want to drag the family around America to play hockey.”

50 years after Vic Mercredi was drafted in the NHL, he’s finally got his own hockey card. Vic was the first hockey player born and riased in the Northwest Territories to be selected in the draft. He went on to play for the Atlanta Flames. Now he’s one of eight players featured in a new set of NHL First Peoples Rookie Cards. It features Indigenous former NHLers who never made it on a card. Vic joins us this morning in studio.

In a news release earlier this month, Upper Deck said the cards would be distributed in several ways, such as at Indigenous hockey camps,…