Troy Talks: Belleville Sens in positive frame of mind ahead of road trip 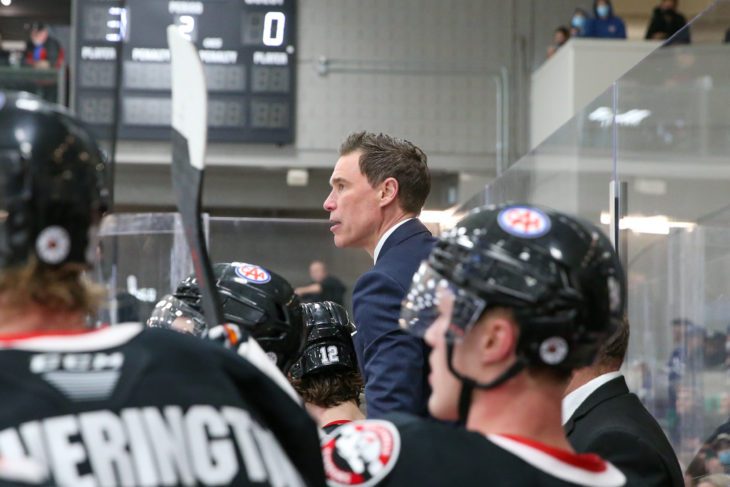 Looking to put a gruelling stretch of results behind them, the Belleville Senators still have ample reason to be optimistic as they begin a crucial three-game road trip against the Laval Rocket (Wednesday) and Springfield Thunderbirds (Friday and Saturday)

We caught up with Head Coach Troy Mann to get a more in-depth look at where the team currently stands, an injury update, the excitement surrounding the return of key veterans, a top prospect poised to make his NHL debut and much more.

Alternate Captains Jake Lucchini and Rourke Charter are both back after stints in Ottawa. How much will their steady presences help to bolster the centre position?

“I think certainly at centre ice. It’s been a constant battle in terms of keeping the depth up all year. Anytime you add Rourke Chartier, who’s still leading our team in goals. He’s able to play on both sides of the puck and is a big part of our special teams. We look forward to having him. We love Lucchini and his versatility, and I still think there is another level to his game. As long as Ridly Greig is up, we’ll keep him on in the middle of the ice. We feel that Cole Cassels is having a pretty solid year. Kyle Betts keeps improving. He’s been able to stabilize the fourth line and help on the penalty kill as well. I think Chartier can certainly add to our offensive game as well here as we get into the week.”

You mentioned that Ridly Greig was recalled to the NHL. How have you seen him continue to grow his game of late?

“Obviously, with the Josh Norris situation, it’s a great opportunity for him. He has arguably been our best player for the last month, another guy that’s contributed on both sides of the puck, and he’s hard to play against. Hopefully, he enjoys his moment on Wednesday night against the New York Islanders. We’ll see how long he’s up there, and we’ll certainly welcome him back. If he comes back.”

Any updates on the injured list heading into this week?

Lassi Thomson has been cleared. He passed his impact tests yesterday, so that’s great for him. Today was his first contact practice. So we’re hoping to get him in the lineup Friday. Roby Jarventie is now just day-to-day and has clearance in terms of contact. So we’re hoping to get him in Friday or Saturday in Springfield. Mads Sogaard remains day to day. So we’ll see where that takes us. Antoine Bibeau remains day-to-day as well and isn’t making the trip. Jayce Hawryluk will be out…