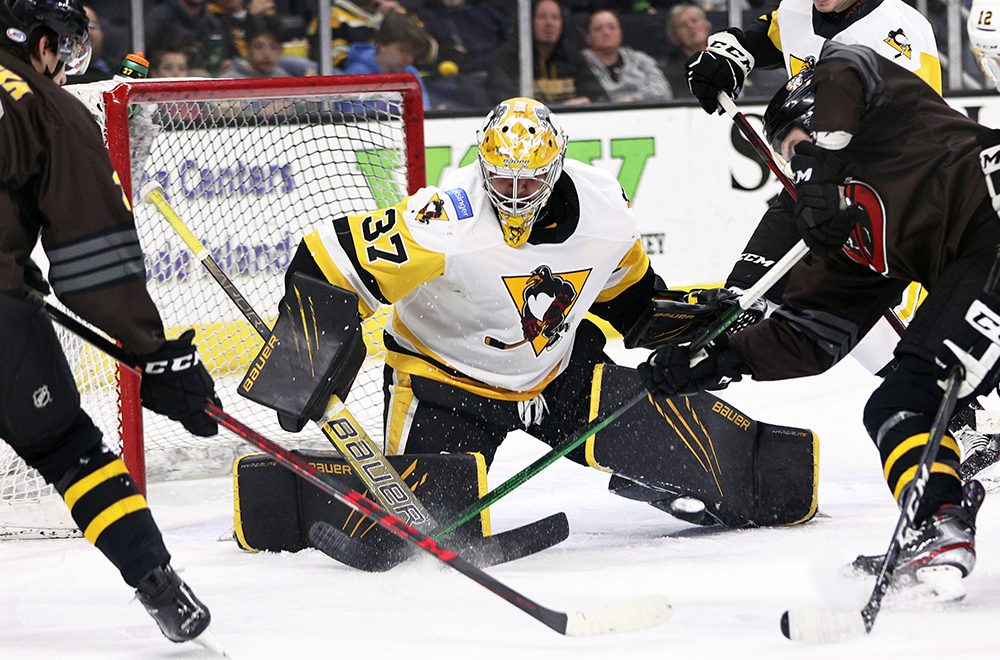 WILKES-BARRE, Pa. – The Wilkes-Barre/Scranton Penguins announced today that they have reassigned goaltender Tommy Nappier to their ECHL affiliate, the Wheeling Nailers.

Nappier was the Penguins goalie for each of their six games in the 2022 Calder Cup Playoffs. The 24-year-old netminder from St. Louis, Missouri started the postseason with a 23-save shutout against the Hershey Bears and went on to have a 3.17 goals against average and .903 save percentage during the playoffs.

In 28 career regular-season games with Wilkes-Barre/Scranton, Nappier has a 14-12-2 record, 3.00 goals against average, .890 save percentage and one shutout.

Nappier is in his third season of professional hockey after one of the most prolific goalie careers in Ohio State University men’s hockey history. In 2018-19, he was named Big Ten Goalie of the Year. One year later, Nappier was voted the Buckeyes’ Team MVP.

At the end of his four years at Ohio State, Nappier ranked third all-time in Buckeyes history with a .925 career save percentage, fourth in career shutouts (8) and fifth in career goals against average (2.31).

Wilkes-Barre/Scranton’s next game is tonight, Tuesday, Jan. 24, the resumption of its suspended contest against the Utica Comets from Oct. 17. The restart is scheduled for 7:00 p.m. at Adirondack Bank Center. The Penguins and Comets will pick up play with 2:43 left in the second period and Wilkes-Barre/Scranton trailing, 2-1.

The Penguins’ next home game is Saturday, Jan. 28, another bout with the Islanders. Puck drop for the Penguins and Islanders’ second meeting of the month is slated for 6:05 p.m. at Mohegan Sun Arena at Casey Plaza.

Individual game tickets for Penguins home games as well as season-ticket packages for the 2022-23 season are on sale now. Full-Season, 22-game, 12-game, Flexbook and Premium Seating plans are available by reaching out to the Penguins directly at (570) 208-7367.