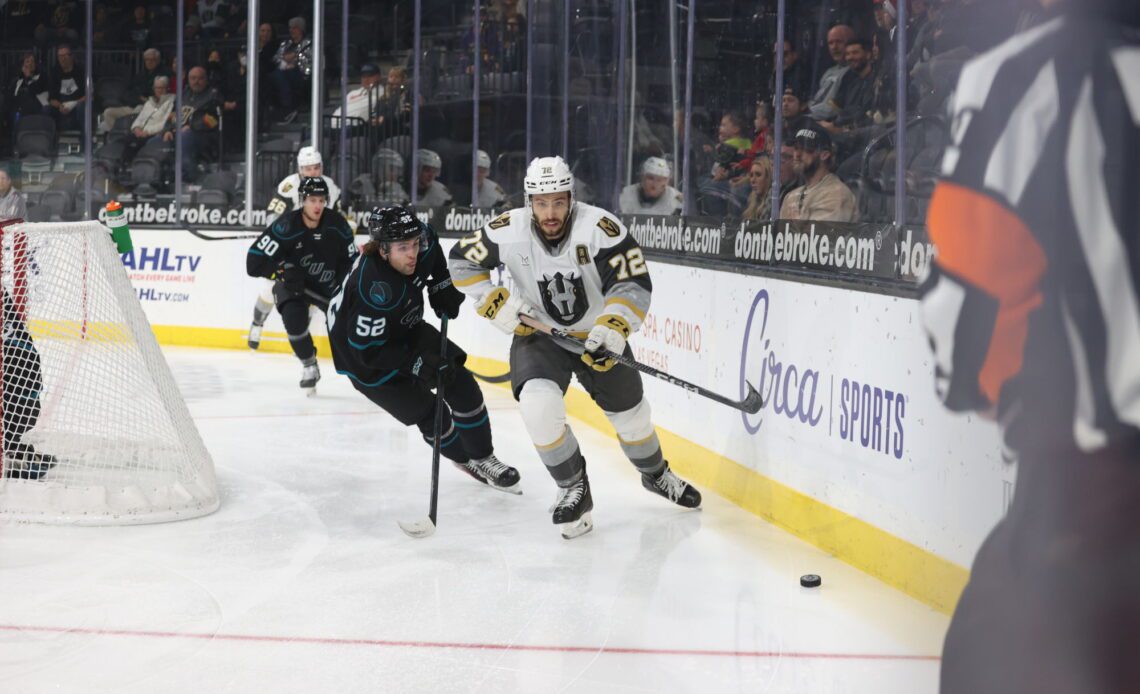 HENDERSON, N.V – The Silver Knights will take on the San Jose Barracuda, who are seventh in the Pacific Division, in home games on both Wednesday and Friday evening. The Knights are looking to bounce back after back-to-back losses against the third-place Colorado Eagles.

“I think keeping pressure on with scoring and the power play is the biggest thing. It’s a quick turnaround, we played a couple days ago,” said defenseman Layton Ahac.

“We just need to do the little things right. We’re going to be working on battling and getting to the net, getting rebounds, and finding that extra goal. Power-play production is going to be huge for us going up against San Jose.”

“[Bordeleau] is a good player, but you can’t give him too much space. We have to play him tight, get your stick in his way and play physical, and we’ll be okay,” added Ahac of first-year player Thomas Bordeleau.

He leads the Barracuda in both points, with 28, and goals, with 18. He is also the former collegiate teammate of first-year Silver Knights player Brendan Brisson.

“We just have to stick to our structure. That’s been winning us games, as well as just competing hard. Playing within our structure, not trying to do too much.”

The Henderson Silver Knights fell to the Colorado Eagles on the road on Saturday afternoon, 5-4, and Sunday evening, 4-3. Brendan Brisson, Lukas Cormier, Maxim Marushev and Connor Ford all netted goals in Saturday’s game. Ford also tallied an additional two assists, with Gage Quinney additionally recording a two-point night. Despite the offensive production, the Silver Knights came up one goal short.

Sunday’s game saw goals from Brisson, Sheldon Rempal, and Sakari Manninen. Brisson’s goal marked his second of the weekend and his third point of the series. Manninen likewise notched three points over the two games. However, like Saturday’s game, the Knights fell in regulation by one goal.

Goaltender Jiri Patera stopped 31 shots on goal out of 35 in Sunday’s game. He has made 30 or more saves in his last three straight starts.