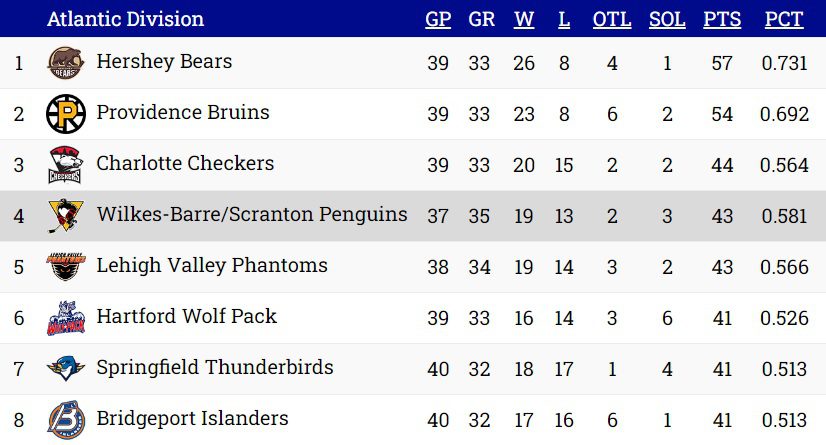 Wilkes-Barre/Scranton has busy week ahead to close out January

Wednesday, Jan. 18 – PENGUINS 2 vs. Syracuse 3
Wilkes-Barre/Scranton and Syracuse went back-and-forth throughout the night, but the Crunch got the bounces to go their way in these clubs’ first meeting of the year. Alex Nylander tallied the Penguins’ seventh extra-attacker goal this season.

Friday, Jan. 20 – PENGUINS 2 vs. Lehigh Valley 5
Lukas Svejkovsky opened the scoring for the Penguins, but a four-goal second period by the Phantoms proved too much to overcome. The rivals combined for four fights in 21 seconds of game time during the third period.

Saturday, Jan. 21 – PENGUINS 3 at Bridgeport 2
Linemates Nylander, Drake Caggiula and Tyler Sikura all turned in multi-point performances as the Penguins clamped down in the third period to close out the Islanders. Dustin Tokarski made 22 saves in his return from the NHL.

Tuesday, Jan. 24 – PENGUINS at Utica
The Penguins resume their suspended game against the Comets from Oct. 17. The game will pick up with 2:43 left in the second period and Wilkes-Barre/Scranton trailing Utica, 2-1.

Wednesday, Jan. 25 – PENGUINS at Rochester
The Penguins and Americans face-off for the first time this season. Wilkes-Barre/Scranton hasn’t won in Rochester since Jan. 13, 2017.

Friday, Jan. 27 – PENGUINS at Lehigh Valley
Game six in the 12-game season series between the Penguins and Phantoms takes place on Friday. Dustin Tokarski is 14-3-5 all-time at PPL Center as either the visiting or home goalie.

Saturday, Jan. 28 – PENGUINS vs. Bridgeport
Wilkes-Barre/Scranton and Bridgeport go at it again, this time on the Pens’ home ice. Alex Nylander has six points (2G-4A) in his last four games against the Isles.

– Dustin Tokarski ranks fourth among all AHL goalies in goals against average (2.21) and save percentage (.926).

– Tyler Sikura has recorded an assist on five of the Penguins’ last seven goals.

– Mitch Reinke’s next assist will be his 100th AHL helper.