PENGUINS CAN’T COME FROM BEHIND IN UTICA RESTART 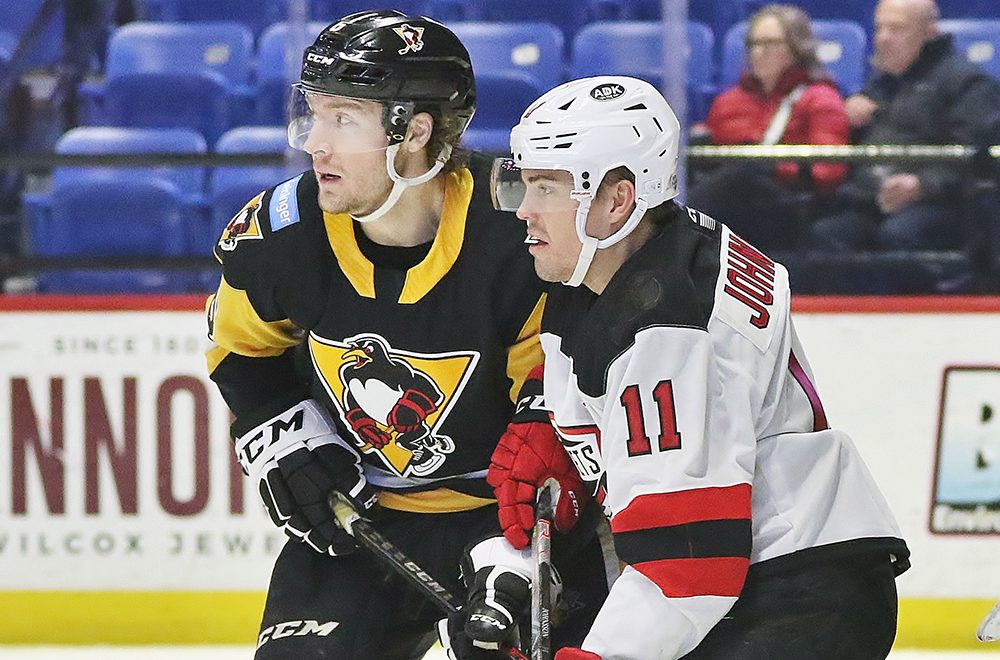 UTICA, N.Y. – In the completion of their game from Oct. 17, 2022, the Wilkes-Barre/Scranton Penguins lost to the Utica Comets, 5-1, on Tuesday night at Adirondack Bank Center.

Play was suspended at the Comets’ arena back in October when a power outage halted the contest with 2:43 remaining in the second period. The game resumed on Tuesday night, and three unanswered goals by the Comets allowed them to win their home opener 99 days later.

Wilkes-Barre/Scranton (19-14-2-3) entered the restart trailing, 2-1. Nick Hutchison opened the scoring at 9:03 of the first period, followed by a redirection goal by Nolan Foote at 15:20. Ty Smith cashed in for a power-play goal midway through the second period, pulling the Penguins within one.

The power outage occurred when Wilkes-Barre/Scranton was about to start its third man advantage of the game. Tuesday’s restart put the Penguins right on that power play, but they were unable to score.

Utica extended its lead to 3-1 with a backdoor one-timer by Robbie Russo that arrived with 0.9 seconds left in the second period.

The Comets received an empty-net goal from Nolan Stevens and a five-on-five goal by Jack Dugan in the last two minutes of regulation, rounding out the scoring.

Nico Daws was credited with the win for Utica, making 19 saves on 20 shots faced. However, neither starting goalie from Oct. 17 was in net when the suspended contest resumed on Jan. 24. Instead, Akira Schmid finished out the contest for the Comets, turning away all 10 shots faced. Filip Lindberg started the game for the Penguins and recorded 12 saves on 14 shots, while Dustin Tokarski served as his replacement with six saves on eight shots against.

Wilkes-Barre/Scranton’s next game is tomorrow, Wednesday, Jan. 24, against the Rochester Americans. Game time between the Penguins and Amerks is scheduled for 7:05 p.m. at Blue Cross Arena.

The Penguins’ next home game is this Saturday, Jan. 28, a tussle with the Bridgeport Islanders. Puck drop for the Penguins and Islanders is slated for 6:05 p.m. at Mohegan Sun Arena at Casey Plaza.