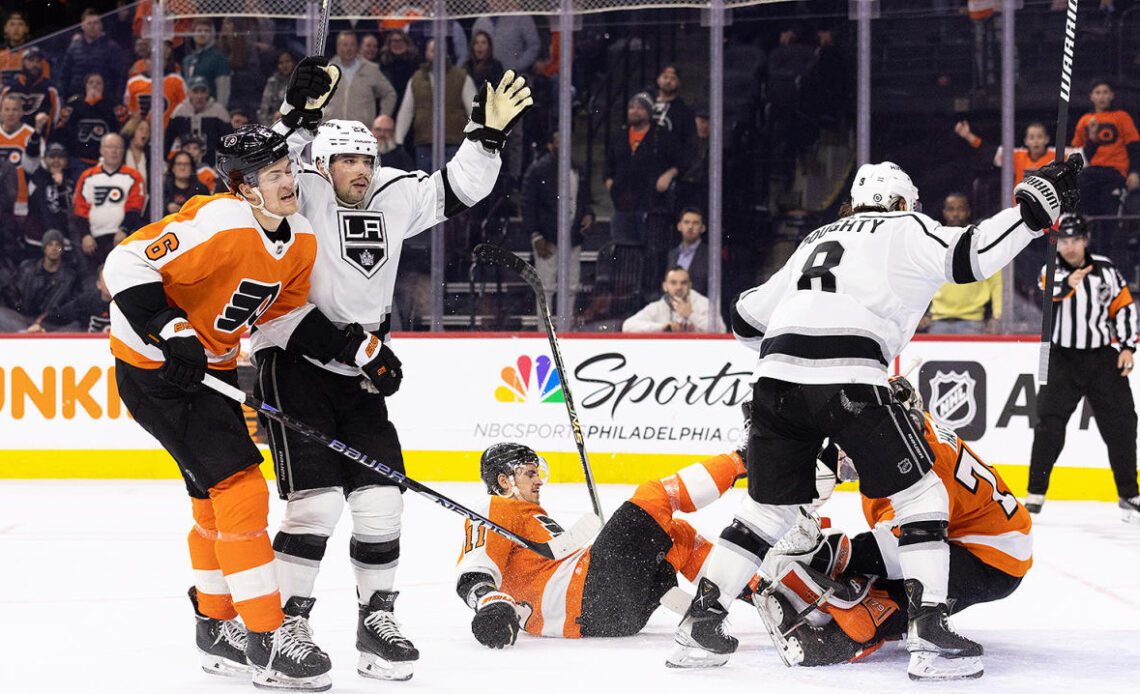 A game in which they never played from behind, the Flyers fell to the Kings, 4-3, during overtime Tuesday night at the Wells Fargo Center.

John Tortorella’s club is 1-7 in OT this season.

The Flyers had two great looks in overtime but were turned away by Kings netminder Pheonix Copley.

Tony DeAngelo was irate after there was no whistle on Copley, who may have gotten away with tripping the defenseman to spring the action the other way.

“It’s a clear penalty,” DeAngelo said. “It’s not even a question about it.”

Thought you were tripped?

Los Angeles entered the night in third place of the Pacific Division.

• The Flyers have dropped their last two games despite scoring three goals in each of them. They’re now 17-5-5 when they score three or more goals.

They need to tighten things up defensively again.

• Coming off of a 30-save win over the Red Wings three days ago, Carter Hart denied 34 of 38 shots from the Kings.

The 24-year-old was busy all night.

“The first 10 minutes of the game, I thought we were going to lose 10-nothing,” Tortorella said. “They just looked so much faster than we were.

“And this is what I like about the team the past couple of nights — I think we found our game, started skating. Just like the other night, we come back being down 3-nothing, we just stayed with our game.

“I thought we played a good game. I thought we worked our ass off against a really good team. I thought we were going to score there at the end; he makes a great save and they go down and score. No [b—-ing] about our game for me.”

• DeAngelo committed a turnover in the defensive zone that led to the Kings’ game-tying goal with 1:24 minutes left in the second period.