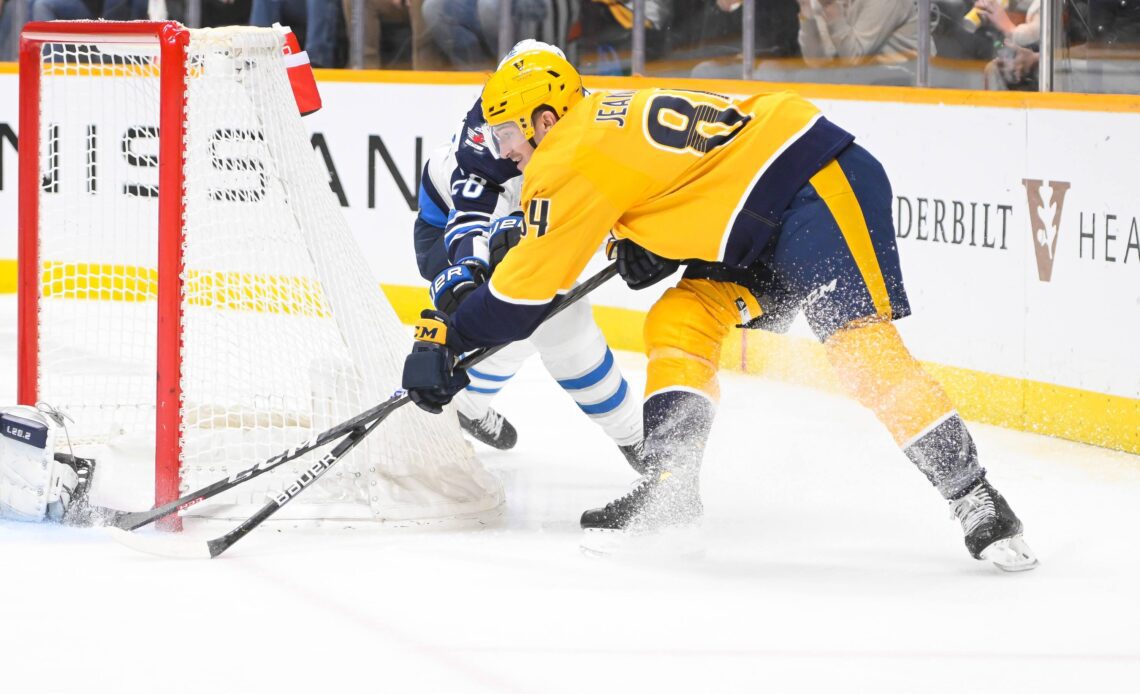 Tanner Jeannot scored early in the third period and Juuse Saros made 32 saves to lead the Nashville Predators to a 2-1 victory over the Winnipeg Jets on Tuesday night.

Cody Glass had the other goal for Nashville, winners of four of five.

“It’s nice to see what our group looks like when we are playing the right way,” Nashville coach John Hynes said. “We’re in a position where we’re continuing to fight for wins and move up in the standings, and I think if we continue to build on what we’ve built the last two games, we give ourselves a really good chance on Thursday.”

Pierre-Luc Dubois scored and Connor Hellebuyck made 39 saves for Winnipeg, which concluded a five-game road trip 2-3-0.

“It certainly wasn’t a 2-1 game in terms of offensive opportunities for either team, but both goalies were outstanding,” Winnipeg coach Rick Bowness said.

At 5:38 of the third, Jeannot picked up the rebound of a Tommy Novak shot and beat Hellebuyck with a wraparound.

The goal not only broke a 1-1 tie, it snapped a 38-game goalless stretch for Jeannot, who scored 24 goals last season.

“It feels really good, a little bit of a weight lifted off the shoulders,” Jeannot said. “My focus has been the same going into every game, just do everything I can to help the team win.”

Jets wrap up 5-game road trip with loss to Predators

Tanner Jeannot lifts Nashville to a 2-1 victory over Winnipeg who conclude a season-long five-game road trip with a 2-3-0 record.

Dubois scored the game’s first goal 48 seconds into the opening period off of a slick backdoor feed from Cole Perfetti. The goal was the fastest from the start of the game for the Jets this season.

Glass tied it at 13:49 of the second, deflecting a Roman Josi shot from the blue line.

“For me, I just need to bear down on those opportunities and put them in the back of the net because it’s not very often you get those chances,” Glass said.

Tuesday was Nashville defenceman Alexandre Carrier’s 141st NHL game, but it took him until then to record his first fighting major. Just over a minute into the first, Carrier took exception to…