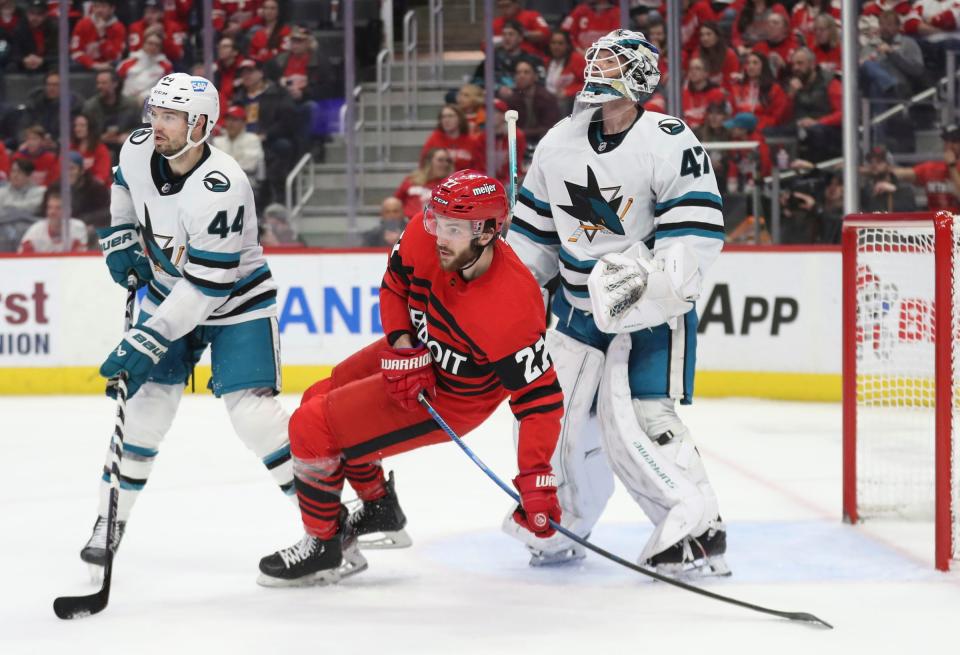 Two leads dissipated as the Detroit Red Wings attempted to leave a favorable impression on their last home game for two weeks.

The San Jose Sharks came into Little Caesars Arena on Tuesday with a record that put them among the bottom five teams in the NHL, but they engaged the Wings in a tight game. Andrew Copp secured two points when he scored 25 seconds into overtime to deliver a 3-2 victory.

Dylan Larkin collected his 400th career point when he set up Adam Erne‘s goal, and Michael Rasmussen also scored in the second period. Ville Husso made one of his best saves late in the game when he denied Kevin Labanc’s attempt to get the puck over Husso’s left leg.

The Wings next play Thursday at Montreal, then Friday at the New York Islanders, before pausing for a weeklong All-Star break.

Moritz Seider drew oohs from the crowd during the first period when he fronted Sharks defenseman Erik Karlsson in the neutral zone and knocked him off the puck and onto the ice. Karlsson was fine – he got right back up – but it was a good tone setter. Husso drew oohs multiple times, like when Marco Sturm’s shot took a bounce off Husso and up into the air, and he was able to glove it as it came down in the paint. The Wings had several good looks during a power play earned when Dominik Kubalik drew a hooking call on Tomas Hertl, but David Perron’s shot went over the net and James Reimer denied Robby Fabbri’s and Filip Hronek’s attempts.

The Wings took the lead 2:17 into the second period when Larkin carried the puck around San Jose’s zone and up high, firing a shot on net that Erne tipped for his sixth goal of the season. The momentum didn’t last long. Timo Meier got a hold of the puck around Detroit’s net and, when his first shot went wide, he was able to get the puck on his stick again, swing it around the back of the net and wrap it around the other post, at 7:58.

The Wings pulled ahead again at 16:29, a few minutes after killing off a slashing penalty to Kubalik. Rasmussen got knocked down as he entered the Sharks’ zone, but picked himself up as David Perron chased…