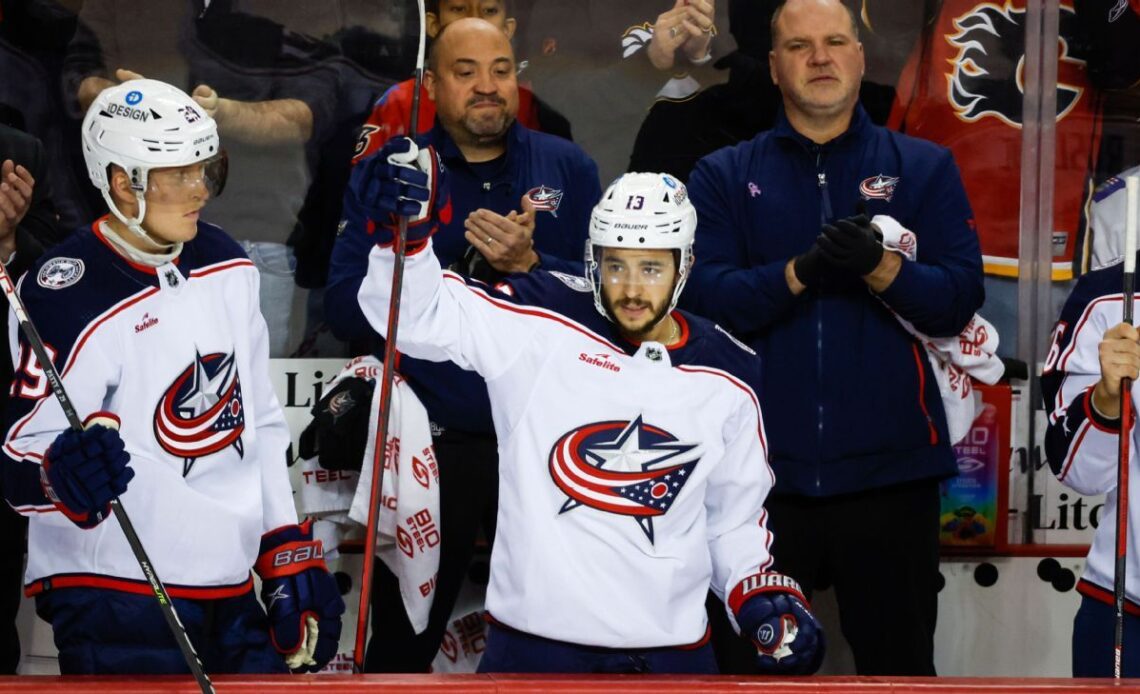 Johnny Gaudreau had a penalty shot and two assists, and he played a role in his new team forcing his old one into overtime.

But his first game back in Calgary after leaving to sign with the Columbus Blue Jackets in free agency ended with Gaudreau facing pressure, losing his balance after a collision and watching Dillon Dube score the winning one-timer in the Flames‘ 4-3 overtime victory Monday at the Scotiabank Saddledome.

“The first time back [brought] a lot of emotions,” Gaudreau told reporters after the game. “A little nervous before the game started but I was excited to be back.”

Gaudreau’s night could be viewed by his overall performance and the spectacle surrounding his return.

Calgary had a 2-0 lead when Columbus eventually drew level midway through the second period. Gaudreau, who logged a team-high 22:54 in ice time, set up the first goal with a cross-ice pass for Kirill Marchenko with 10:56 left.

The Blue Jackets tied it at 2 less than a minute later with Gaudreau setting up another cross-ice pass that led to Patrik Laine scoring on a one-timer with 10:08 remaining.

Gaudreau was also on the ice for the Jackets’ tying goal just less than five minutes into the third period.

Gaudreau played the final shift of regulation and in the final shift of overtime before his second shift ultimately ended with him colliding with Noah Hanifin, who forced the turnover that led to Andrew Mangiapane setting up Dube’s game winner.

Coming back from a two-goal deficit only to be at the center of events that led to the winning goal was just part of what made Gaudreau’s first game back in Calgary since leaving the Flames enthralling.

Gaudreau and the Blue Jackets were serenaded with boos when they took the ice before the national anthems. He started the game on a line with Laine and Jack Roslovic before he was booed upon his first touch.

His second shift was marked by the cacophony of “JOHN-NY! JOHN-NY! JOHN-NY!” while his next shift showed what makes him one of the league’s most dangerous players. The Flames were in the Blue Jackets’ zone when an errant pass from MacKenzie Weegar was picked off by Gaudreau, who was then hooked by Chris Tanev before being awarded a penalty shot.

Boos continued to cascade throughout the Saddledome as Gaudreau gathered the puck and closed in on the net only to have his shot go wide over Dan Vladar‘s glove with 14:46 left in the first period. Gaudreau took advantage of another Flames miscue on his fourth shift when he…