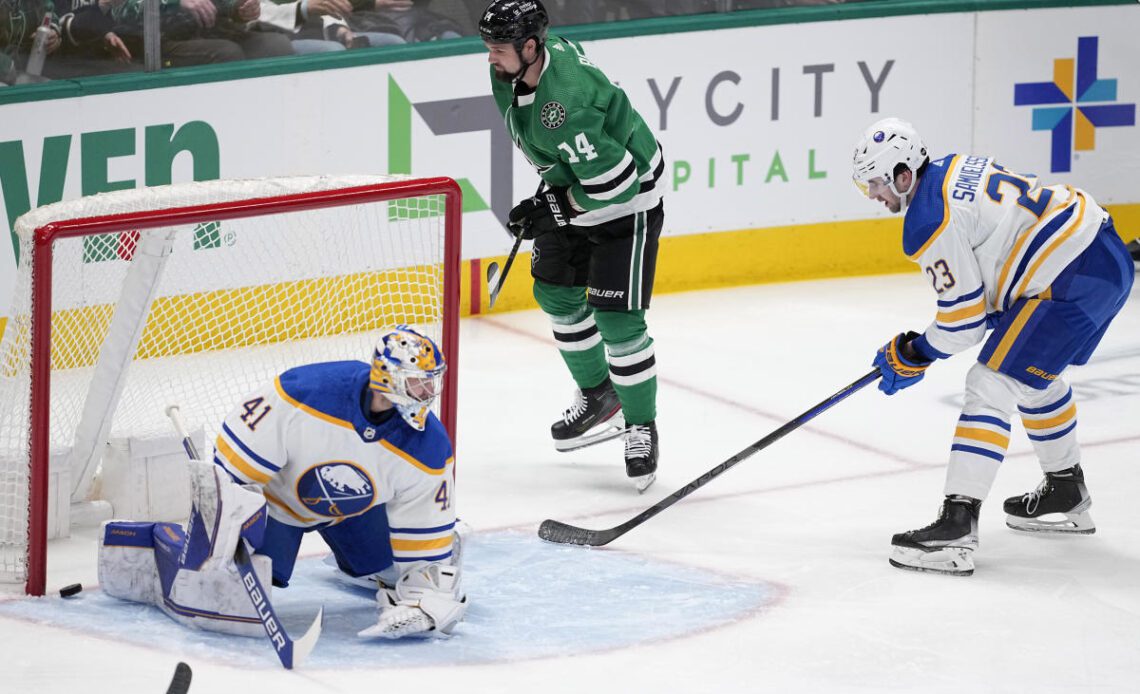 DALLAS (AP) — Rookie Owen Power scored his first goal of the season 56 seconds into overtime and 41-year-old Craig Anderson stopped 29 of 31 shots in his 700th career NHL appearance as the Buffalo Sabres beat the Dallas Stars 3-2 on Monday night.

Rasmus Dahlin and Victor Olofsson also scored for the Sabres, who have won three consecutive games.

Jamie Benn and Jason Robertson scored for the Stars, who had shutouts in their last two. Jake Oettinger made 22 saves.

Power scored from the right circle off a pass from Tage Thompson, who had two assists.

Benn opened the scoring only 1:48 in and 25 seconds into a power play with a second-effort tap-in at the far corner of the net following a skate save off a centering pass by Roope Hintz, who missed Dallas’ previous seven games with an upper-body injury.

Dallas recorded the first 10 shots on goal through nine minutes with Anderson stopping multiple point-blank opportunities. Soon after, Dahlin’s one-time blast from the high slot tied the score at 1 midway through the period.

Olofsson converted on a 3-on-2 break with a one-timer from the right circle 1:44 into the third period to put Buffalo ahead 2-1.

Robertson scored at 5:58 to tie the score at 2 after collecting a puck on the doorstep centered by Joe Pavelski, who assisted on both Dallas goals.

Thompson went into play seventh in the NHL with 61 points.

Robertson has 32 goals, tied with Thompson and Colorado’s Mikko Rantanen for third place in the league.

Referee Furman South had to leave the game early in the second period for medical attention after Buffalo’s Peyton Krebs caught him in the chin with his stick. Referee TJ Luxmore went solo but only for a few minutes before South rejoined him.

Sabres: Will complete a road back-to-back on Tuesday against the St. Louis Blues.

Stars: Will host the Carolina Hurricanes on Wednesday in the third of four consecutive home games going into the All-Star break – followed by four more home games coming out of the break.