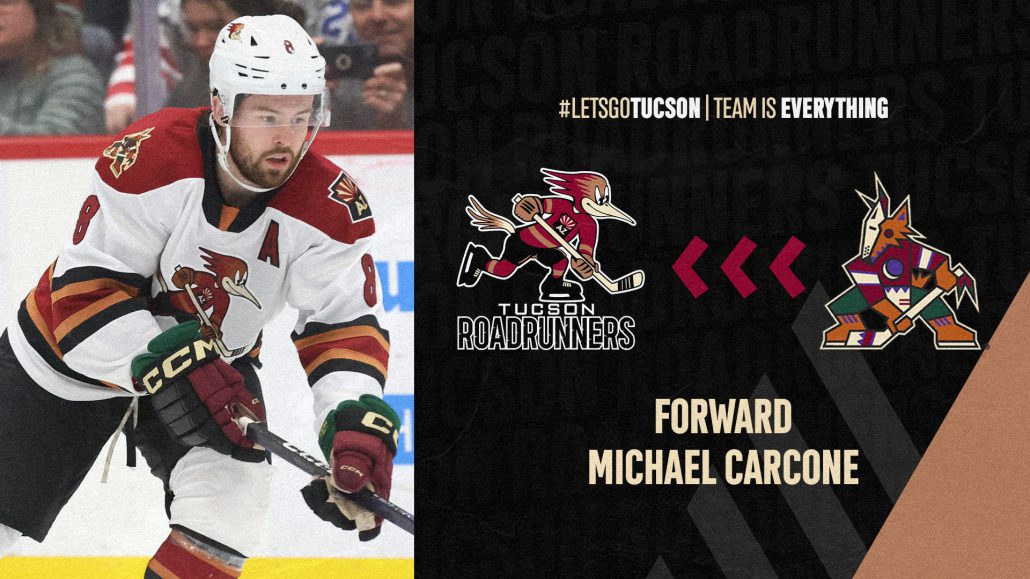 Tucson, Arizona – The Arizona Coyotes announced Monday that forward Michael Carcone had been assigned to the Tucson Roadrunners.

Carcone returns to Tucson after his second NHL call-up of the season, where the 26-year-old appeared in three games for the Coyotes and recorded an assist in their 4-1 win over the Vegas Golden Knights on January 22. Carcone has three points (2g 1a) and is a plus-three in nine games with Arizona this year since his first call-up on December 27. He made his NHL debut with the Arizona Coyotes last season on December 28, 2021.

With 20 goals, 31 assists and 51 total points in 32 outings, Carcone currently leads the American Hockey League in scoring by three points. His 11 power-play goals and 26 total power-play points are also atop the AHL. Mike is on pace to lead the Roadrunners in goals for a third-straight season after he netted a franchise-record 24 goals during the 2021-2022 campaign. He earned his first career AHL All-Star Selection on January 11 and enters the week on an active ten-game scoring streak for the Roadrunners, which is also a franchise record.

The Roadrunners will play their next four games at home at the Tucson Arena, beginning on Tuesday, January 24, with the first of two contests against the reigning Calder Cup Champion Chicago Wolves.

Click Here to Read the Full Original Article at TucsonRoadrunners.com…