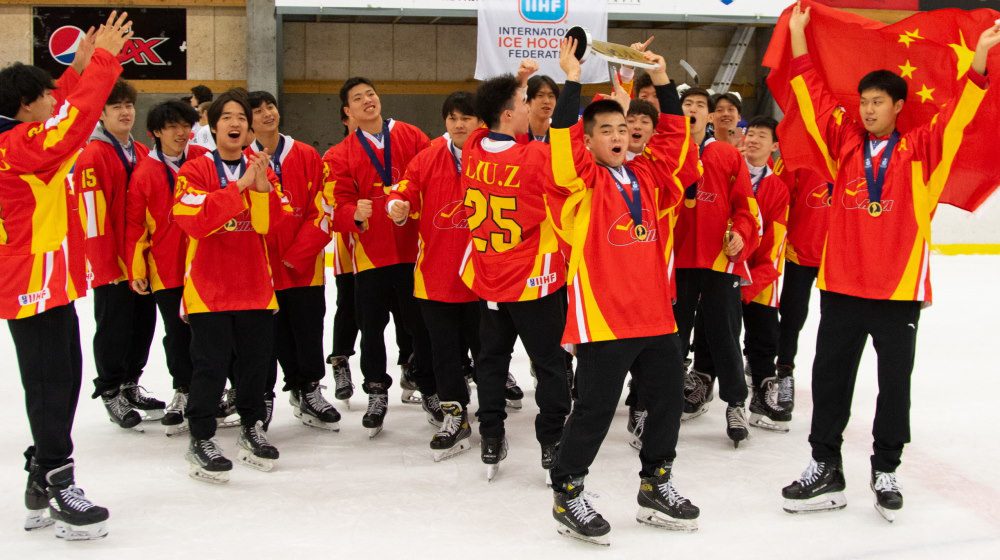 China’s U20s national team returned to the ice after a two-year absence – and duly secured gold for the first time since 2019. Next year the team could play at its highest level since relegation to Division III in 2011.

The People’s Republic arrived in Reykjavik, Iceland, for this Division IIB tournament as something of an unknown quantity. The competition was cancelled in 2021 due to the pandemic and the Chinese team was unable to compete in last year’s edition as the country continued with strict travel restrictions. As a result, none of the 2023 roster had previous experience of U20 competition. However, on its return to the international stage, the team started out with a battling overtime win over Belgium and went on to defeat all opponents on its way to gold.

After that nerve-jangling start, China went from strength to strength. Game two brought a 4-0 win over Mexico, then came an 8-2 thrashing of top-seeded Serbia. Host nation Iceland could not capitalize on home advantage and the final game on Sunday ended in another 8-2 scoreline against Chinese Taipei.

Wei Ziyao, China’s ‘Mr. Versatile’ in Iceland, reflected on the tournament for the IIHF’s Weibo broadcast. “We got better and better throughout the five games,” he said. “When we first arrived, we were nervous in the first game. Through our constant discussions with each other and communication with the coach, the whole team gradually got better. We are excited about the result.”

His captain, Chen Kailin, paid tribute to his colleagues’ adaptability and willingness to learn – game to game, period to period and shift to shift. The players responded well to the input of head coach Aleksandrs Macijevskis. The 47-year-old Latvian, a much-travelled forward in a playing career that criss-crossed the Baltic, previously coached his homeland’s women’s national team and won a Latvian championship with Kurbads in 2018.

Wei was a great example of that. After arriving in Iceland expecting to play on the blue line, he found himself moved to the other end of the rink after a couple of games. He responded with 5 (3+2) points in the concluding games.

“I started playing defence,” Wei added. “Our coach thought we needed more power on the offensive side and changed my position to forward. I was a bit nervous at first, but then I realized that as long as I focused on my own game, it was actually a bit less difficult than I expected. If I just concentrate on my own game, I can play…