News: Saturday Highlights: Beauts get back in win column 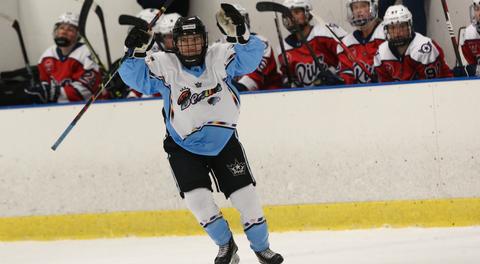 The second half of the Premier Hockey Federation’s regular season schedule is underway with a trio of weekend doubleheaders.

The Beauts celebrated ‘Pride Night’ and a victory on Saturday, snapping a 10-game losing-streak with their first win since Nov. 6 at Northtown Center. Lovisa Berndtsson deservedly earned first star honors with a 41-save performance to pick up her first career win, stopping a relentless Riveters attack that included 18 third period shots. Buffalo’s defense did the initial damage offensively with first period goals by Whitney Dove on the power play, followed by Jessica Healey who notched her first in the PHF. Minttu Tuominen’s fourth of the year brought the Rivs within one after 20, but a Courtney Maud second period shorthanded goal and an empty-netter by Claudia Kepler late in the third period clinched the win. Eveliina Makinen made 12 saves in the loss.

A string of three goals in a span of 54 seconds put Toronto ahead for good in the first rematch between last year’s top two regular season teams. Tied 2-2 in the second period, Breanne Wilson-Bennett scored her second of the game at 13:02, followed by back-to-back snipes from Tereza Vanisova at 13:19 and 13:56 to make it 5-2. Brittany Howard’s 14th of the year and second of the game extended the lead late in the middle frame, and Shiann Darkangelo scored a late third period goal to round out the T6 offense. Connecticut’s Emma Vlasic and Melissa Samoskevich both scored for the second straight game with first period goals. Caitrin Lonergan scored on a third period Whale power play, and Emma Keenan matched her career-high with her third goal of the season. Elaine Chuli stopped 21 shots to extend Toronto’s win-streak to six. Abbie Ives got the start for the Whale but was relieved by Meeri Raisanen after the fifth T6 goal.

Corinne Schroeder continued her brilliant first season between-the-pipes for Boston with her sixth shutout and 12th win of the campaign. The rookie stopped a career-high 50 shots in the Pride’s first ever matchup against the Force to maintain first place in the overall standings. Loren Gabel recorded her first career hat-trick in a four-point performance, including the game-winner on the power play midway through the first period….