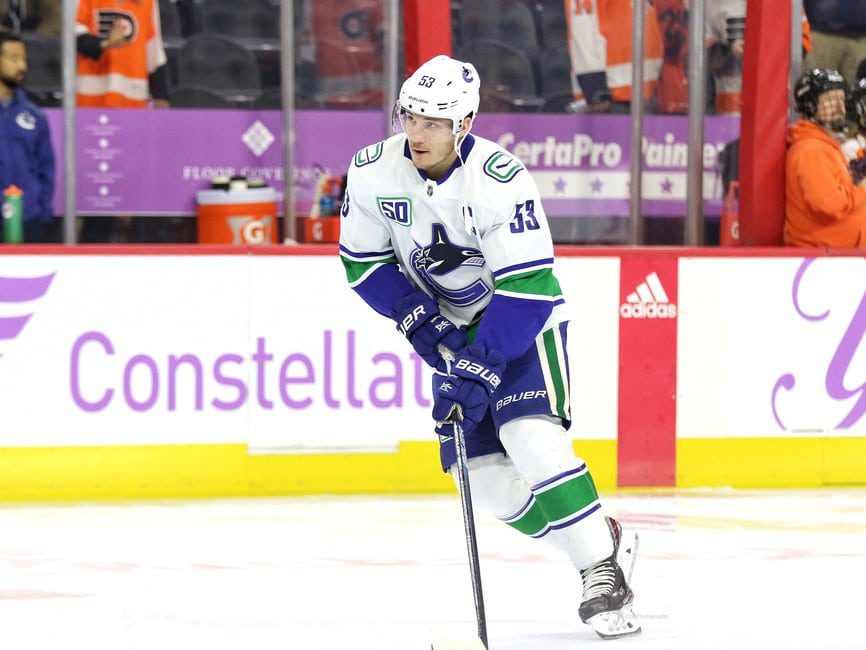 In today’s NHL rumors rundown, the Vancouver Canucks are reportedly narrowing down the field of suitors interested in Bo Horvat. Meanwhile, Patrick Kane and Jonathan Toews are saying mid-February for any trade decisions. The Edmonton Oilers and Toronto Maple Leafs are both interested in Vladislav Gavrikov and the Montreal Canadiens are still planning on negotiating an extension with the injured Cole Caufield. Finally, the San Jose Sharks are allowing teams to talk extension with Timo Meier before potentially trading for him.

Jeff Marek noted that the Canucks want three players including a top prospect for Bo Horvat and the organization is narrowing down the list of teams that are willing to meet that asking price. Elliotte Friedman noted during the 32 Thoughts segment of Saturday’s Hockey Night in Canada broadcast, “Okay, so there was a lot of talk about this in the last 24 to 48 hours. I think the reason is, I’m getting the impression that Vancouver is separating the teams who are willing to consider that or continue down that level of conversations from the teams that won’t.”

Friedman said that Vancouver is figuring out who’s really serious. “I don’t believe there is anything imminent at this time but I do think the Canucks know who’s in the game and who isn’t,” he noted.

Marek also noted that the Canucks are expected to announce Rick Tocchet as the next head coach on Monday.

Blackhawks’ Toews and Kane to Decide Future in Mid-February

Marek reports that it sounds like Patrick Kane and Jonathan Toews aren’t prepared to make a decision on their respective futures until sometime in mid-February. Marek added that the season-ending injury to Max Pacioretty will make things interesting for those two players as the Carolina Hurricanes may have opened up the opportunity to make a pitch for either player.

Friedman noted that the Edmonton Oilers and Toronto Maple Leafs are two teams that have kicked tires on Vladislav Gavrikov and the Columbus Blue Jackets have allowed teams to talk to Gavrikov about a possible extension. The defenseman is a pending UFA.