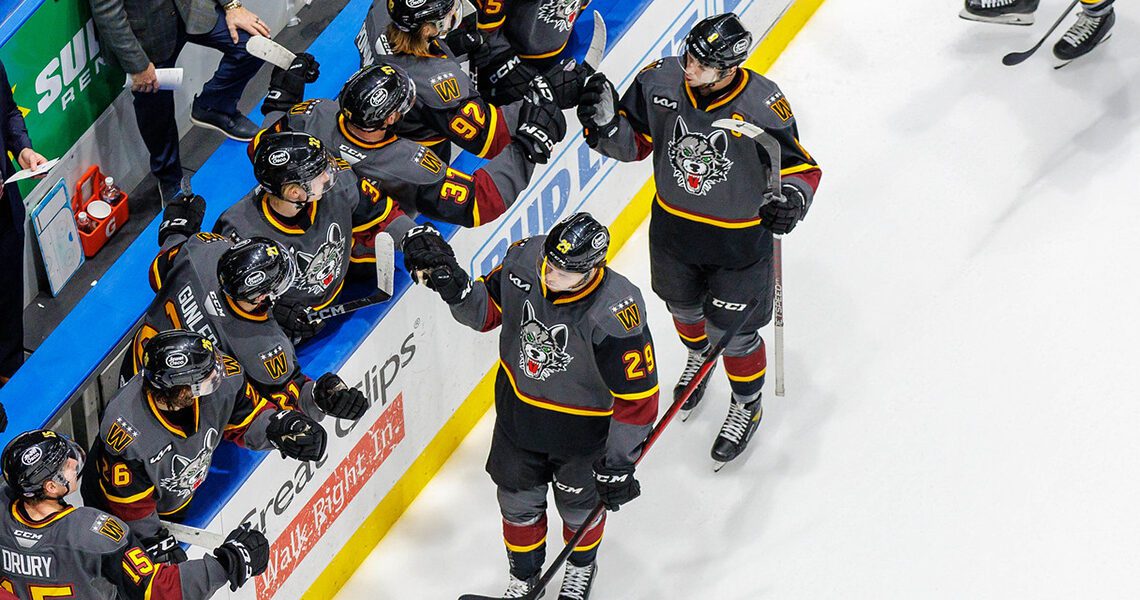 ROCKFORD, Ill.—The Chicago Wolves celebrated hitting the halfway mark of the 2022-23 season with a 6-2 victory over the Rockford IceHogs on Saturday night at BMO Center.

“We’re working hard, we’re trusting each other, we’re playing as a team and it’s working,” Rees said. “We’re playing to what the coaches want us to play by getting pucks in deep when we need to and making plays when we can and it’s clicking right now.”

Rees got things started midway through the opening period when he swooped in and knocked a rebound of a Josh Melnick shot past IceHogs netminder Dylan Wells. Melnick and Griffin Mendel each were awarded assists on Rees’ sixth goal of the season.

Later in the period, Perlini took a terrific cross-ice feed from Tuukka Tieksola and rocketed a one-timer from the right circle that sailed by Wells’ glove and into the back of the net for a 2-0 Wolves lead. Also assisting on Perlini’s 10th goal of the season was Lagesson.

The Wolves ran into penalty trouble early in the second and it cost them when Adam Clendening scored while Rockford held a two-man advantage.

Gunler’s one-timer from the left circle off a pass from Malte Stromwall gave the Wolves a 3-1 lead early in the third. It marked Gunler’s eighth goal of the season and Stromwall’s team-leading 19th assist and 26th point. Lagesson earned his second assist of the game on the score.

Suzuki made it a three-goal Wolves advantage when he took a pass from Lagesson and broke in alone on Wells before flipping a forehand shot past the IceHogs goalie.

Rockford didn’t go away quietly as they came right back on a goal by D.J. Busdeker but Rees’ second goal of the game pushed the game out of reach for the IceHogs.

With the Wolves on the power play, Rees redirected Anttoni’s Honka’s shot from the point for a 5-2 Chicago lead.

“It was definitely a good one for me—I needed it,” Rees said. “It felt good and it was great for all the boys. We need to keep pushing here.”

Moments later, the defending Calder Cup champions took a 6-2 advantage on Ponomarev’s 10th goal of the season. The center banged home a shot from in close that Wells couldn’t…