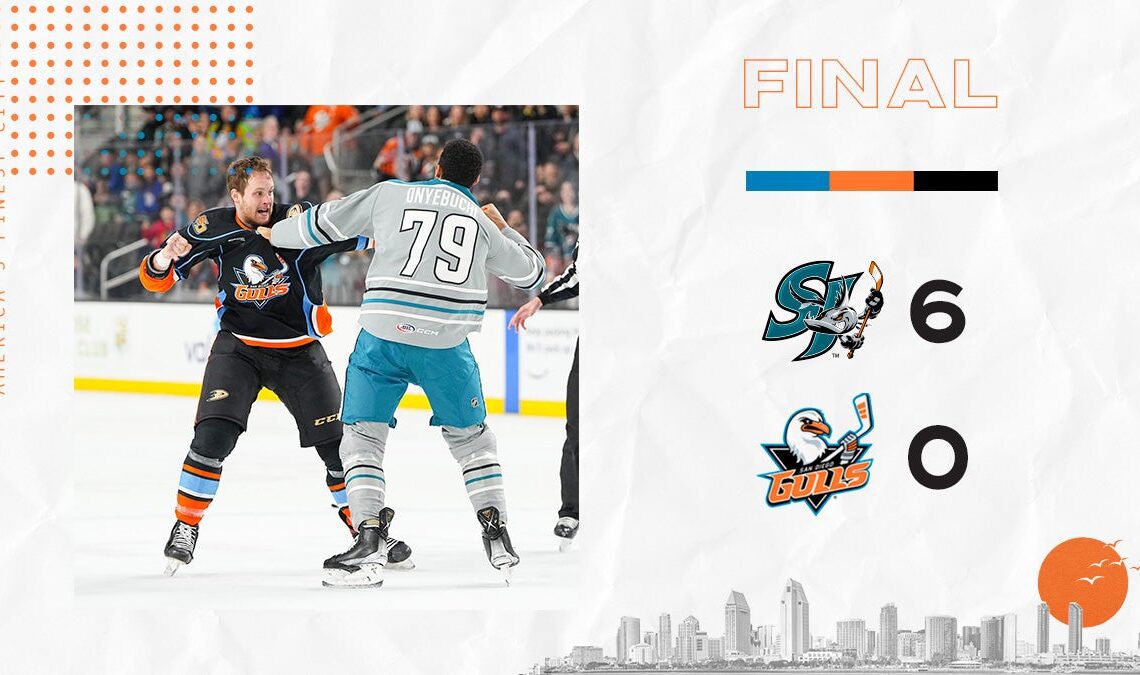 “It was just a weird game, to be honest with you, for us,” Gulls assistant coach Jason Clarke said. “I mean, we competed and won a lot of one-on-one puck battles and just had a lot of compete tonight, a lot of fight in our game. It just got away from us in the third. I mean, had a lot of [offensive] zone time the first and second period, but just couldn’t seem to find the back of the net. In this league, you’ve got to compete for 60 minutes and that just didn’t happen tonight.”

Searching for a fast start, San Diego earned the game’s first power play just 1:41 into the opening frame. The Gulls failed to generate momentum, as the Barracuda successfully turned aside the attempt and used it to grab the game’s first goal.

Criscuolo – acquired by San Jose in a trade with the Detroit Red Wings organization earlier this week – made an immediate impact, scoring just over five minutes into regulation to give the Barracuda a 1-0 lead.

Pressure from San Jose created a defensive zone turnover, with Criscuolo gathering the puck above the faceoff circle. The veteran picked up speed and cut toward the net, flipping a backhand shot past Lukas Dostal in just his second shift with the Barracuda.

Another former Gull, San Jose captain Andrew Aggozzino, doubled the Barracuda advantage at 1:41 of the middle frame. William Eklund did the dirty work, collecting a loose puck behind the net and shaking free from the Gulls defense. As he dipped behind the net, he sent a reverse pass to a waiting Aggozzino, who roofed his shot over Dostal to collect his 11th goal of the season.

The Gulls seemed to turn the tide with physical play. Dmitry Osipov began the hard-nosed play, leveling Suess with a big hit in the neutral zone. Several Gulls followed suit, and as the hits ticked up, San Diego’s pressure provided a spark.

The Barracuda would put a stop to the momentum as Darren Brady stretched San Jose’s lead to three, scoring off the rush late in the second period. His 1-2=3 points against the Gulls this season leads all San…