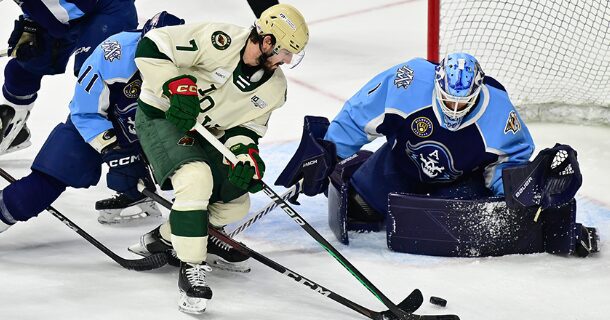 DES MOINES, Iowa – The Iowa Wild fought back to force overtime Saturday with a late game-tying goal from Marco Rossi, but the Milwaukee Admirals took the extra point in a shootout and a 4-3 win. Rossi scored twice for Iowa while Devin Cooley stopped 43 shots in net for Milwaukee.

Iowa opened the scoring at 9:37 of the first period on the power play. Joe Hicketts found Steven Fogarty in the right circle, who set up Marco Rossi above the hashmarks. Rossi’s first attempt was deflected, but he finished his own rebound over the shoulder of Cooley to give Iowa a 1-0 lead.

The Wild carried a 1-0 lead and 6-5 shot advantage into the first intermission.

Spencer Stastney equalized the score at 1:43 of the second period when his blue line shot banked in off the post.

Iowa regained the lead at 15:13 of the middle frame. After Dakota Mermis intercepted a pass in the neutral zone, he laid the puck off for Sammy Walker and drove to the net, where he poked home Walker’s feed for his fifth goal of the season.

The Admirals tied the score with 3:33 remaining in the second when Jachym Kondelik tipped a point shot by Adam Wilsby past Zane McIntyre (16 saves).

Zach Sanford gave Milwaukee a 3-2 lead at 8:31 of the third period when he received a pass through the slot from Wilsby and put a shot over the shoulder of McIntyre.

Rossi tied the game at 3-3 with 15 seconds remaining in regulation. With McIntyre pulled for an extra attacker, Hicketts fired a pass to Fogarty just wide of the net. Fogarty tipped the puck into the crease for Rossi, who forced it over the goal line to send the game to overtime.

Neither team was able to score in overtime and the goaltenders held off the first three rounds of shooters in the shootout. The Admirals secured the win in the bottom of the fourth round when Phil Tomasino beat McIntyre along the ice.

Iowa outshot Milwaukee 46-20. The Wild went 1-for-5 on the power play while the Admirals were 0-for-2 with the man advantage.

The Iowa Wild take on the Rockford IceHogs at Wells Fargo Arena on Tuesday, Jan. 24 at 7:00 p.m.