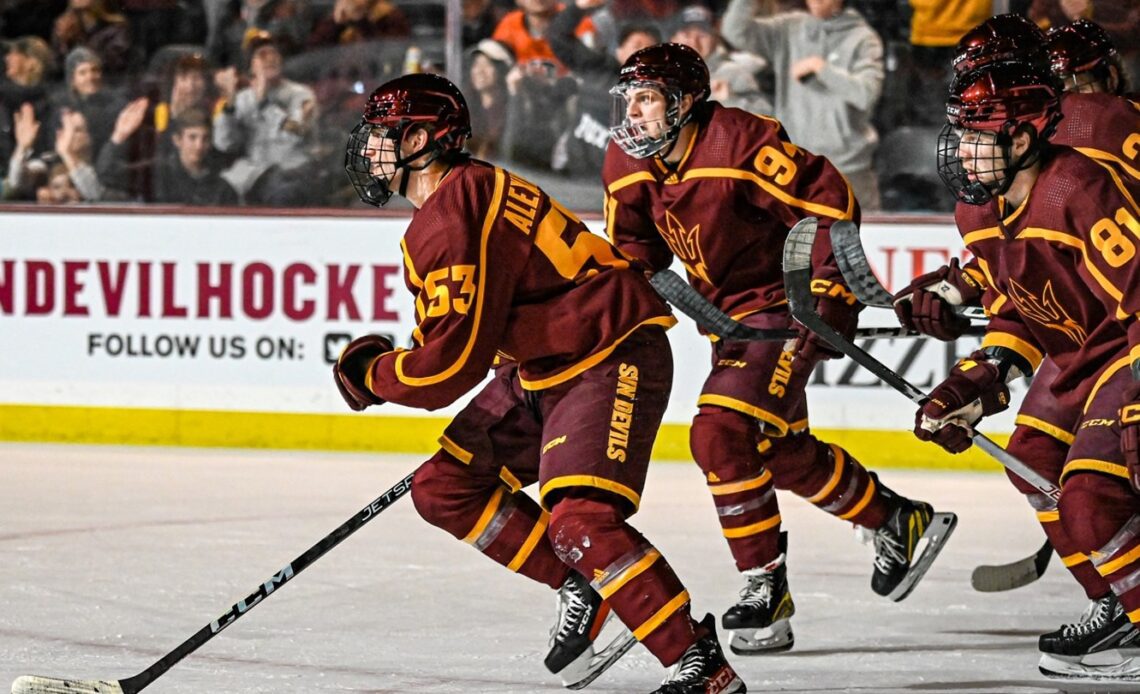 TEMPE – The Sun Devils continued to battle puck luck despite scoring three goals from three different skaters against the Tigers on Saturday night. The Arizona State ice hockey team (11-16-0) massively outshot No. 20 RIT (17-6-1) but could not evade the series sweep and 5-3 loss on Saturday night.

The game seemed ready for the Sun Devils’ taking as goals from Ryan Alexander, Matthew Kopperud, and Chris Grando put ASU up 3-2 by the beginning of the third period. RIT went on to score three unanswered goals, flipping the switch and securing the 5-3 win.

The Sun Devils outshot the Tigers, 35-20 and, counterintuitively, are now 0-8-0 when shooting between 30-39 shots in a single game. TJ Semptimphelter made his 27th consecutive start and tallied 15 saves, mostly all from the second period when the Tigers put up 12 shots on goal.

ASU came out strong in the first, holding RIT to only one shot on goal for the entire opening frame. The one shot on goal by an opponent is tied for the fewest shots on goal allowed in a period all-time. The feat has happened once before in program history against Alabama-Huntsville on Nov. 3, 2017.

ASU continues to fight injuries among its core starting group. The need for experience in the d-group with the absence of Tanner Hickey and Timmy Lovell brought graduate alternate captain Demetrios Koumontzis, normally a forward, into the game as a top line left defenseman. It was the first time that Koumontzis had ever played defense. He answered the call of duty, blocking a game-high four shots.

Power play chances for both units were aplenty, but neither squad could secure a man-advantage goal. ASU had seven opportunities – four in the first period and three in the third – while RIT had four changes – three in the second and one in the third.

ASU had four power play opportunities, including a five-minute major on RIT, but could not find the back of the net for the elusive power play goal.

Inside the final two minutes of the opening frame, freshman forward Ryan Alexander lit Mullett Arena with his seventh goal of the season to give the Sun Devils a 1-0 lead, assisted by Robert Mastrosimone with his team-leading 19th assist of the season and second-straight game with an assist. The first…