Blackhawks offense continues to roll in win for Blues 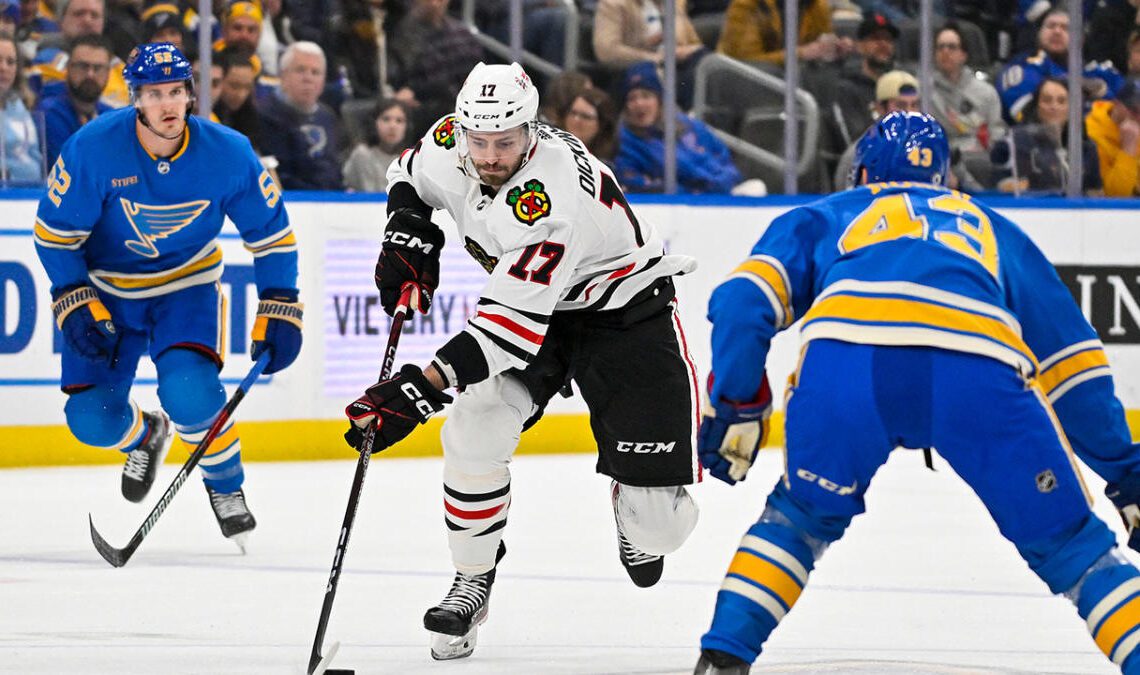 The Blackhawks knocked off the St. Louis Blues 5-3 at Enterprise Center on Saturday for their sixth win in seven games.

Here are 10 observations from the win:

1. Jaxson Stauber made his first career NHL start and became the fifth goaltender to play in a game for the Blackhawks this season. He was tested early and often, and he stood tall. He stopped the first 13 shots he faced and finished with 29 saves on 32 shots for a save percentage of .906.

3. The Blackhawks extended their lead to 3-0 in the second period then gave up a power-play goal to Jordan Kyrou in the second period that made it 3-1. It gave the Blues a little bit of life, but it only lasted 65 seconds after Andreas Athanasiou answered his fellow Greek. That was a huge response, and it forced the Blues to make a goaltender change with Jordan Binnington allowing four goals on seven shots.

4. Jason Dickinson had three points (one goal, two assists) and ended a 30-game goal drought. Sam Lafferty scored his third shorthanded goal of the season and added an assist for a multi-point effort. Reese Johnson scored his second goal in as many games, and Colin Blackwell and MacKenzie Entwistle each added assists. That’s a lot of production from the bottom-six forward group.

5. When Chicago’s first line of Max Domi, Tyler Johnson and Patrick Kane was on the ice together at even strength through two periods, shot attempts were 12-1 St. Louis, per Natural Stat Trick. In the third period? The Blackhawks led 5-2 in shot attempts when the three of them were on the ice, and Domi scored a much-needed insurance goal with 3:59 left in regulation. Kane was held without a shot on goal for the first time since Dec. 5, 2021, which came in a 3-2 shootout win over the New York Islanders.

6. Isaak Phillips got into his first career NHL fight with Ivan Barbashev, who tried lining up Dickinson near the end of the second period. Phillips didn’t like it and a scrap ensued. Barbashev won the fight, but Phillips got a nice tap on the back side from Barbashev after as a sign of…